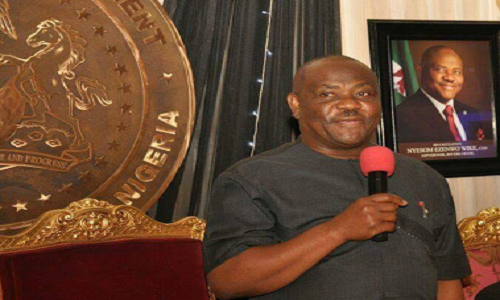 Governor Nyesom Wike of Rivers State has berated the state chapter of the All Progressives Congress, APC, for linking him with the judicial scandal against former governor of the state and current Minister of Transportation, Rotimi Amaechi.

Two justices of the Supreme Court – Justice Sylvester Ngwuta and Justice Inyang Okoro – who were accused by the Department of State Services, DSS, of corruption in a sting operation last month, had accused Amaechi of attempting to bribe them to deliver justice in favour of the All Progressives Congress governorship candidates, especially in Rivers and Akwa Ibom states.

In a statement on Thursday, the Chairman of the APC in Rivers State, Chief Davies Ikanya, had accused Governor Wike of using the two Justices for political purpose to demean Amaechi.

But the governor has described the statement of his alleged involvement in the judicial scandal as scurrilous, noting that as governor, his predecessor left a shameful legacy in the state.

In a statement by the State Commissioner of Information and Communication, Dr Austin Tam-George, the governor denied the allegation by the APC, describing the act as a disgraceful plight.

The commissioner noted that Governor Wike had deliberately refrained from making public speech on the said subject, noting the state had been justified by the accusation from the two justices.

He said: “The attention of the Rivers State Government has been drawn to yet another scurrilous statement by the Rivers State branch of the All Progressives Congress (APC). Wike has refrained from making public comments on this subject, because the people of Rivers State feel sadly vindicated by these latest scandals swirling around the Transportation Minister.

“As governor of Rivers State, Mr. Amaechi left a shameful record of waste and dysfunction. His thoughtless policies and mismanagement of public funds literally broke the economic spine of Rivers State.

“Amaechi has of course always protected his innocence. But even chieftains of his party, the APC, including serving governors, have publicly praised Mr. Amaechi for bankrolling the party’s presidential campaigns in the 2015 general elections, and for sponsoring candidates in that election”.

Tam-George, however, urged the APC to ask the minister to step down from office, in order to allow for a dispassionate inquiry into the serious allegations against him.