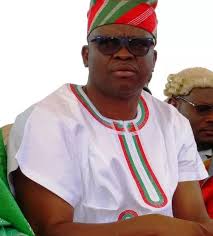 The Federal High Court sitting in Ado-Ekiti has fixed Monday, December 2, to give judgement on the freezing of  Zenith Bank accounts belonging to Ekiti State Governor, Ayodele Fayose.

Recall that, the Economic and Financial Crimes Commission (EFCC) on the 20th of June frozen two accounts domiciled with the bank’s Ado-Ekiti branch belonging to Fayose.

However, following the adoption of written addresses and other evidence by parties involved in the suit, the presiding judge, Justice Taiwo Taiwo fixed the date for revisit of the case.

Fayose’s lawyer, Mike Ozekhome, had approached the court for an order ordering the EFCC (first respondent) and Zenith Bank (second respondent) to immediately lift the freeze order on the accounts.

Ozekhome argued that EFCC acted illegally in the freezing of his client’s personal accounts, the move he said was unconstitutional and an infringement on the Fundamental Rights of the applicant.

According to him, the anti-graft agency’s move was contrary to Section 308 of the Constitution of the Federal Republic of Nigeria, 1999, as amended,  which granted immunity to a sitting governor not to be prosecuted in either civil or criminal matters.

Ozekhome urged the court to grant all the prayers of the applicant while cost should also be awarded in favour of his client.

While adopting his written address and 10 paragraph-affidavit, counsel to EFCC, Mr Rotimi Oyedepo, told the court that the commission acted within its statutory and constitutional power, citing Section 6(5)(b) of the Money Laundering Prohibition Act, 2011.

He also argued that Sections 19, 34 of the EFCC Establishment Act empowers the commission to carry out every action or step taken against the applicant.