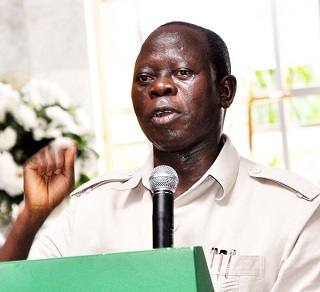 Barely days after handing over the helm of affairs of Edo State to the governor, Godwin Obaseki, the Economic and Financial Crimes Commission is on the trail of ex-governor, Adams Oshiomole over allegations of fraud leveled against him.

According to reports, Oshiomole has been petitioned at the anti-graft agency by two concerned citizens of Edo State Dr. Osadolor Ochei and Comrade Kola Edokpayi, accusing him of inflating contracts and diverting billions of Naira while in office

It was also stated in the petition that the former president of the Nigerian Labour Congress (NLC), allegedly used N10b to build mansion which was designed and constructed by Verissimo – a South African architect in Iyamho, Edo State.

The petition reads in parts: “As earlier reported by some newspapers, the sprawling mansion has swimming pools, water fountains, multiple theatres for cinema and live performances; huge event halls, bridges, man-made lakes, lodges of different sizes among others.

“Recent aerial photographs revealed that he has also constructed a Helipad within the vast estate. The size and scope of the mansion, completely negates all possible explanations for the source of Oshiomhole’s fund, which he had used for the construction.

“We hold strong view that the allocation of Edo State government land in Okoro Otun Avenue by Oshiomhole to himself amounts to insider’s deal, which is a violation of the oath of office he subscribed to as governor.

“The N23million that Oshiomhole paid for the Okoro Otun land is certainly not from his salary that is about N600,000 per month. The contractor constructing his new home also got the contract for the construction of the controversial new Central Hospital.

“Governor Oshiomhole also awarded the contract and the payment in a week for the construction of 168 Hotel Rooms in Edo University Iyamho at the sum of N1.680billion. The average cost per room translates to N10million per hostel room.

“On April 11, 2011, Governor Adams Oshiomhole went ahead to borrow N25billion from the capital market through the issuance of bond. While presenting an FCMB Cheque of N6billion to the Mr. Saad, Managing Director of Hitech Construction on March 2, 2011, Oshiomhole listed several roads as part of the first phase of the Storm Water Project to include Adolor College Road, Textile Mile Road, Otote Road, Uwelu Road, Akugbe Street, Iyoba areas among others.

“These roads are still earth roads today; just as the Storm Water Project had been abandoned by Hitech and the gullies they left has killed over six persons, including children. We are also aware that when Adams Oshiomhole went to the capital market to borrow 25billion facilitated by Godwin Obaseki’s Afrivest company; the purpose of the loan was not just the storm water project but also included a power project.

“The Azural Power Project has since started in Edo State but without the government being a major investor apart from the paltry shares given to it by the promoters as compensation for the land acquired,” the petition stated.

Responding to the petition, an EFCC source said “The petition will be properly and thoroughly investigated; nobody is under special protection from anybody or our agency because of his membership of the ruling All progressives Congress (APC) or not. We will prove some cynics wrong by doing justice to this petition.’’ 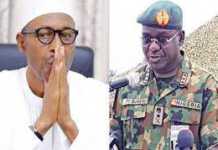