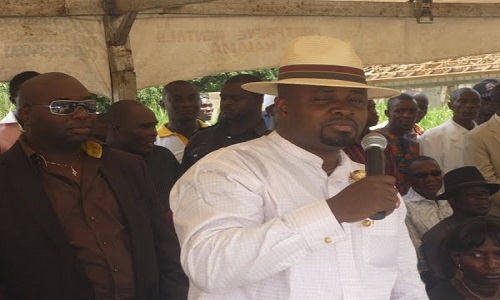 Former Senior Special Assistant on Domestic Affairs to Ex-President Goodluck Jonathan, Waripamo-Owei Dudafa has accused the Economic and Financial Crimes Commission (EFCC) of illegally detaining him for his refusal to give incriminating statement against former First Lady, Dame Patience Jonathan.

Dudafa made the allegation in a November 4 petition to the National Human Rights Commission (NHRC), wherein he also accused the anti-graft agency of deliberately keeping him in custody, despite his fulfilling the bail conditions set by the Federal High Court, Lagos.

The former domestic aide to the ex-president was arraigned by the EFCC before Justice M.B Idris in June, this year, on a 23-count charge bordering on the laundering of over N1. 67 billion.

He was also arraigned, alongside two persons and four companies, before Justice Babs Kuewumi of the same federal court for money laundering to the tune of $15 million.

He was also ordered by Justice Idris to deposit his international passport with the registry of the court.

But in the petition to the rights commission, Dudafa said “despite meeting all the Herculean bail conditions as ordered by the two courts, the commission has failed to fulfil its part, by verifying all the title documents of my sureties”.

He accused the anti-graft agency of punishing him for his loyalty to former President Jonathan and his family.

“Various attempts by my lawyer to ensure that the commission deposits my international travel passport with the court since I was admitted to bail have proved abortive, irrespective of the fact that the two courts at various sittings compelled and ordered it to release the said passport.

“The EFCC has also refused blatantly to verify all the title documents provided by my sureties at the Land Registry for over two months in relation to the bail conditions granted me by Justice Babs Kuewumi of a Lagos Federal High Court.

“From the above, it has become obvious that the EFCC is desperate to keep me perpetually in prison with the ultimate aim of killing me in prison despite the fact that my deteriorating state of health has been made known to the EFCC through a medical report dated August 29, 2016, and issued by the Nigerian Prison Service, Ikoyi, Lagos”, Dudafa said.

He, therefore, appealed to the commission’s chairman “to use his good offices to intervene speedily in my predicament in the hands of the EFCC, as it is clear case of arbitrary abuse of power, flagrant disregard to court order and breach of my fundamental rights as a citizen of Nigeria”.