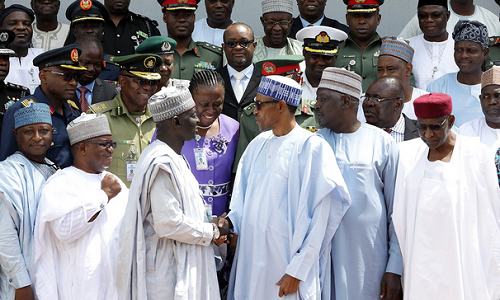 President Muhammadu Buhari on Thursday disclosed that he almost absconded the office of the President of the Federal Republic of Nigeria when he met an almost empty treasury on resumption.

He made the remark when Participants of the Senior Executive Course 38 of the National Institute for Policy and Strategic Studies (NIPSS), submitted a report to him at the Presidential Villa, Abuja.

Noting that daily oil production of 2.1 million barrels was recorded between 1999 and 2015, the president said that there was virtually no savings on ground despite the huge income during the period.

Infrastructures, he said, were also in dilapidated states.

To make matters worse, President Buhari said that oil prices in the international market, which sold for over $100 per barrel, fell below $30 per barrel under his tenure.

The Course 38 Participants were led to the Presidential Villa by Acting DG of NIPSS, Mr. Jonathan Juma.