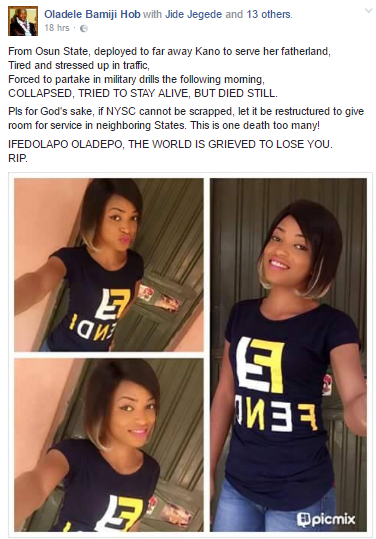 In Osun State, Governor Rauf Aregbesola have been paying workers half their monthly salary because of the precarious financial situation the state has found itself. While the governor scrambles to get some projects completed so as to ensure he has more than just beautiful schools to show for his eight years in power, workers have been bearing the brunt. Mrs Oladepo is one of such workers. She was paid her August salary (half) mid-November, after which she joined other workers who have kept their fingers crossed waiting for the next half salary. Things have been this bad in Osun for more than a year.

Last week, a local government worker in the state stole a gallon of vegetable oil and some other food stuffs from the same woman who have been selling to him on credit. As though he stole from the woman to punish her for being an Aregbesola loyalist despite the governor’s perceived insensitivity to the plight of the people of the state, he stole the food stuffs knowing he would be caught.

Feeding is a daily struggle for many families in Osun. Some have died in their sorrow and hopelessness, while the strong are holding on, counting down to the end of Aregbesola’s reign.

It was in this hardship that the parents of Ifedolapo Olapade paid for her education, hoping that some day, they would look back and have no regrets running into debts to train her. But now, she’s gone. Some have blamed her death on the defective system we have in our country, while others called it destiny. Whichever was responsible is not important right now to her parents who are in grief in Osogbo, the Osun State capital, and her church where the wedding ceremony of another young lady was celebrated just days ago. If she couldn’t attend, Mrs Olapade must have thought about her daughter and pictured how her own wedding day would look like when they spoke of the wedding ceremony in her church. But she will never see Ifedolapo again, as she passed away at the National Youth Service Corps orientation camp in Kano where she was posted to serve her fatherland.

According to reports, Ifedolapo died after she was forced to partake in some camp activities after she asked to be excused because she was ill.

“They (officials) assumed she was pretending to be sick in order to dodge parade, so they refused to treat her until the situation got complicated,” a lady at the orientation camp was quoted to have said.

As investigations continue into what led to Ifedolapo’s death, her family and friends in Osun mourn. They ask for nothing but peace at this trying time.