We only got $200, phones from Basketmouth – Robbery suspects 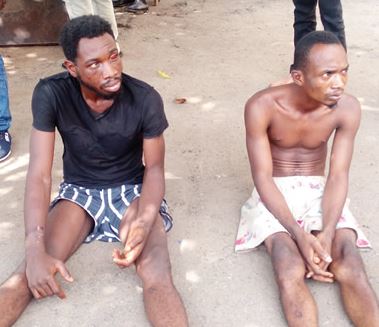 More than two months after popular comedian, Bright Okpocha, AKA Basketmouth, was robbed in his home at Lekki, Lagos, the police have apprehended the suspects and paraded them before journalists at the Lagos State Police Command headquarters, Ikeja.

The leader of the three-man gang who attacked Basketmouth, 24-year-old Chibuzor Ugwu, explained that they simply stumbled on the comedian’s house during their robbery spree on September 7.

Ugwu, an Enugu State indigene living in Anambra State but came to Lagos regularly on the sole mission of carrying out robberies, explained that he was an internet fraudster for three years before he ventured into robbery.

He said, “Anytime I came to Lagos, I took my gang to vandalise vehicles and steal auto parts. We normally targetted Toyota and Honda vehicles.

“But the day we robbed Basketmouth’s house. We had operated on some vehicles in the area that day. We then peeped into a compound and saw a very nice car. When we gained access into the compound, we realised we could make more money by robbing the occupants of the house.

“We then used a bolt cutter to enter through the kitchen. It was when we entered the house that we realised that it was Basketmouth’s house. We saw the pictures of him and his family on the wall.”

According to Ugwu, who said he had done nothing else than internet fraud and robbery since he left secondary school, as soon as they saw Basketmouth, they believed they had hit the mother lode.

The suspect said he pointed a gun he was holding at the comedian and told him to cooperate.

He said they were shocked the comedian told them he had no cash at home.

Ugwu said, “We thought we were going to find millions of naira at the house. He was begging us not to hurt his family. He said he did not keep cash at home. But we told him to cooperate so that we would just operate peacefully and leave.

“We searched the whole apartment and found nothing. We only got a $200 note in his wallet along with the mobile phones in the house which he handed to us.

“Eventually we left with the little we could find, we were not ready to hurt him because it was clear he was telling the truth when we searched everywhere and found no money.”

He said the phones collected in Basketmouth’s house were sold to a friend he identified as Osama at the Computer Village in Ikeja.

Ugwu explained that he bought the gun he took to the operation for N80,000 in Benue State.

Saturday PUNCH leart that Ugwu entered the police net when he went to a police station to reclaim his vehicle that was impounded after he abandoned it on a road where it broke down at Ijeshatedo area of Lagos.

“I had abandoned the vehicle on the road for some days. When I went there to pick it, I was told the police had impounded it. When I went to the station to claim it, I did not know the police had previously arrested a friend of mine who knew about my robbery activities,” he said.

The friend he was talking about is 21-year-old Joseph Chimezie.

Chiemezie said he met Ugwu in Anambra State at a joint.

“He is fond of buying drinks for young men at the joint. I told him that anytime he was leaving for Lagos, he should take me along with him so I could find a job,” he said.

He said the day he eventually left for Lagos with him, a member of Ugwu’s gang took him to Ilasamaja and handed him a bag containing guns.

According to him, he was told to take the guns to a house but on the way, the police stopped him. When they searched the bag, they found guns and arrested him.

Chimezie said, “I don’t know about when they robbed Basketmouth. I did not follow them. I did not know that the police were looking for them.

“When they handed me the bag containing the guns, I was afraid and would have droppped it and run away but I knew nowhere in Ilasamaja. All I wanted was to make a better life for myself in Lagos.”

The Commissioner of Police, Lagos State, Mr. Fatai Owoseni, said the suspects would soon be charged to court.