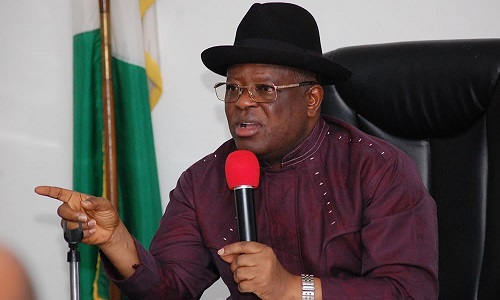 Governor Dave Umahi of Ebonyi State has been hailed by the state chapter of the Committee for Defence of Human Rights (CDHR) for ordering the immediate release of a woman accused of stealing cocoyam worth N400.

The woman and her children had been in Abakaliki prisons for an unspecified period of time following her inability to fulfill stringent bail conditions for her freedom.

However, relief came the way of the woman when the National Human Rights Commission, NHRC, during a visit to Governor Umahi, briefed him on her situation.

The governor immediately gave order for the woman’s release from prison following the briefing by the NHRC.

In its reaction, the Ebonyi CDHR Chairman, Emeka Anosike, said Mr. Umahi’s action portrayed him as a lover of human rights.

“The Governor has shown that he is a human right activist and we wish to commend him for his benevolence in directing the release of the indigent woman. There are many similar cases of this nature in the prisons today. We are appealing to his Excellency to also look into their plights”, he said.

“We also appeal to his Excellency to further direct the committee for prerogative of mercy in the state to look at the cases of prison inmates who are mentally deranged and lunatics”, the release stated.