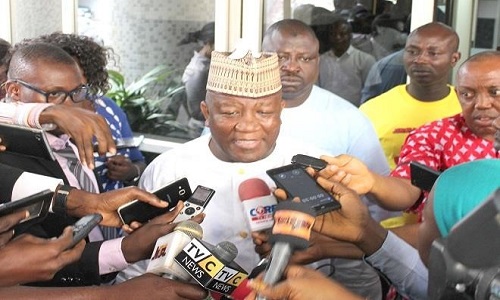 State governors, under the aegis of the Nigerian Governors’ Forum, on Tuesday demanded the release of ecological fund to their respective states.

They made the call after a closed door meeting with Minister of Finance, Kemi Adeosun and Central Bank of Nigeria Governor, Godwin Emefiele, in Abuja.

Chairman of the Forum and Governor of Zamfara State, Abdulaziz, who led some of his colleagues to the closed-door meeting, which was held at the headquarters of the Ministry of Finance, said the governors decided to meet the minister and CBN boss to request the disbursement of the ecological fund to states.

Mr. Yari said most of the states face environmental challenges and as such could not continue to suffer in silence when the ecological fund could be used to address the problem.

“We are concerned seriously about the environment. The desertification in the North, oil and gas spills in the South-South and erosion in the South-East.

“And we have a lot of funds in the ecological stabilisation funds. Those funds are not being discussed at National Economic Council.

“What we discuss at NEC is usually briefing on excess crude account and the federation account. But this fund is not being discussed at that platform.

“We will like to have this fund available every month because those funds are federation funds and we are having so many problems. We need the money”, he said.

The NGF Chairman said the state governments would also want access to foreign intervention in relations to the environment.

When asked if the states also requested for fresh bailout from the federal government, Mr. Yari said there were no such requests.

He said the states are only asking for the disbursement of the ecological fund to address the high level of environmental degradation in their respective states.

“We never asked for anything called bailout… it is media creation.  I wonder how the media fabricated all those stories.  When it comes to story about states, media turn the story upside down”, Gov. Yari fumed.