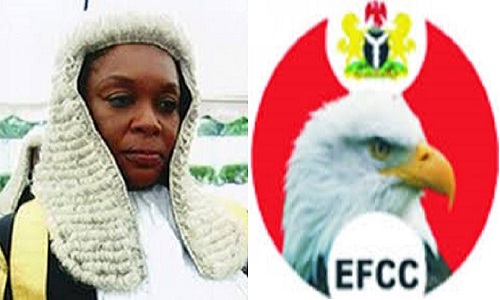 An N18million financial transaction involving Justice Rita Ngozi Ofili-Ajumogobia, one of the six judges under investigation, has been uncovered by the Economic and Financial Crimes Commission, EFCC.

The N18 million was allegedly wired to a foreign account from a domiciliary account operated by Justice Ofili-Ajumogobia for the purchase of a property in the United Kingdom, Daily Trust reports.

Citing EFCC sources, the newspaper reported that Ofili-Ajumogobia owned up to the money but claimed it was a loan obtained from a family friend.

“The ‘family friend’, who is chairman of an oil and gas company, has been invited by the EFCC for questioning”, the source said.

It added that: “So far, he had told operatives that the money was an assistance he rendered to her”.

The EFCC source said: “Inquiry into the loan facility as claimed by both of them showed no formal agreement or documentation as to how and when the repayment would be made”.