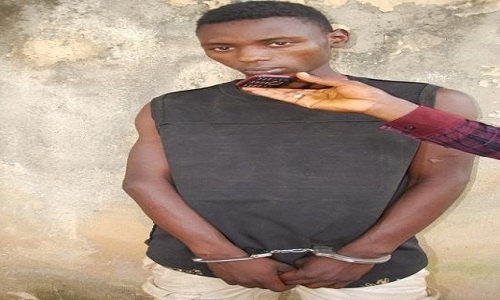 Adamu Jibril, the suspect arrested in connection with the killing of a serving NYSC member in Kaduna State, Lawal Auwal Kontagora, has confessed to the killing.

Jibril, 22, said he killed the late Kontagora to stop him from dating a girl his friend wanted to go out with.

The suspect, who lives in Malali, while speaking with newsmen in Kaduna, said his friend, Aminu Bahago, approached him to help him confront a man he suspected to be dating a girl he had interest in.

“He said I should come and accompany him to the guy and I told him I wouldn’t want us to waste time there because I don’t want to be out for long in the night. He went in, carried a gun and a knife and gave me the knife.

“When we got to the place he showed me the guy from a distance, as we approached the car he knocked on the door of the car as it was locked.

The Kaduna Police Command on Saturday said it arrested a suspect in connection with the killing of the NYSC member.

Kontagora recently returned to Nigeria after completing his studies from a Malaysian university to do the compulsory one year NYSC programme before he was killed on October 17.

Two suspects earlier arrested for the crime, have already been charged to court.