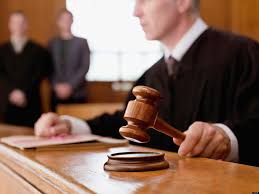 All the three members of the panel of the Abuja Division of the Court of Appeal hearing the appeals relating to the Peoples Democratic Party’s governorship candidate in Ondo State ahead of the election slated for November 26, have disqualified themselves from further presiding over the cases.

The special  panel raised to determine the appeals relating to the PDP governorship candidate in Ondo State is led by Justices Jumai Sankey.

The two other members are Justices E. Agim and O.E William-Dawudu.

Justice Sankey, in a short ruling, directed that the files of all the five pending appeals relating to the PDP governorship ticket in Ondo State should be returned to the President of the Court of Appeal, Justice Zainab Bulkachuwa, for re-assignment to another panel.

The Sankey-led panel withdrew from further presiding over the cases following the petition by one of the respondents in the cases, Mr. Biyi Poroye, who had obtained the orders of the Federal High Court in Abuja recognising Jimoh Ibrahim as the candidate of the party in Ondo State.

Acting on the order made by Justice Okon Abang of the Federal High Court, the Independent National Electoral Commission, dropped Eyitayo Jegede, belonging to the Ahmed Makarfi-faction of the PDP.

The electoral body substituted Jegede’s name with that of Ibrahim of the Ali Modu Sheriff faction of the party.

Poroye in his petition leveled various allegations of compromise and likelihood of bias against Justice Sankey, other members of the panel and Justice Bulkachuwa.

He specifically alleged that the panel was constituted to urgently hear and determine the cases because the President of the Court of Appeal had been compromised.

He also alleged that all the members of the panel had been compromised to deliver judgment in favour of Jegede.

Before taking a short break to deliver the ruling disqualifying themselves from further hearing the cases, the panel listened to the lawyers representing all the parties to the cases.
Poroye’s lawyer, Dr. Alex Izinyon (SAN), denied knowledge of the petition, so also did all other lawyers, including Chief Wole Olanipekun representing Jegede.

Attempts by the appeal panel to confront Poroye with the allegations he had leveled against the Justices were futile.

Nobody among the audience responded when his name was called and urged to speak about his petition.

Eyitayo will have to wait for a new panel to be constituted to enable him to prosecute his appeals against the orders made against him by Justice Okon Abang of the Federal High Court.