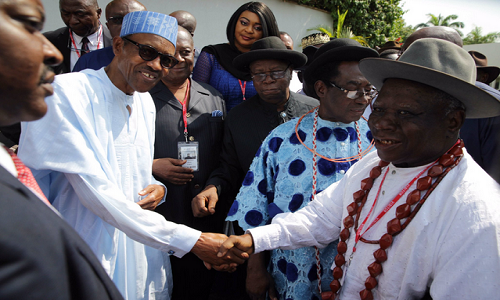 The Middle Belt Youth Leaders Forum (MBYLF) has commended President Muhammadu Buhari’s move to restore peace in the Niger Delta following his meeting with leaders in the region on Tuesday.

The forum’s Secretary General, Kanum Terrence, who addressed a press conference in Abuja on Wednesday, however, called on militant groups in the region to embrace the peace move and avoid any armed conflict.

According to the MBYLF, refusal to embrace the peace initiative could result in military action which could have dire consequences on the region.

He said: “The Middle Belt Youth Leaders Forum has followed with satisfaction the meeting of President Muhammadu Buhari with leaders and other stakeholders in the Niger Delta to discuss how to end the militancy and sabotage of oil infrastructure in their region.

“We see the development as a confirmation of President Buhari’s declaration that he is the president of all Nigeria just as it is a testament to his credentials as a democrat with firm belief in the power of dialogue.

“We totally support the call for the leaders of the Niger Delta to take the initiative more to do than anyone else to bring peace to their region especially now that is glaring that they are the ones influencing the militant groups”.

The Middle Belt youth group further stated that the militants and their sponsors should be put on notice that any attempt to dare the might of the military and their ability to protect the nation’s territorial integrity from external and internal aggressors would not be taken likely by the people of Nigeria.

It, therefore, urged the stakeholders to be prepared to make realistic concessions when it comes to the discussion of their 16-point demand since it would be counterproductive to wreck the other geo-political zones in the course of righting the decades of neglect that the Niger-Delta has suffered.

“We therefore call for mutual caution on the part of all those involved so that this initiative that will bring development to the Niger Delta and return Nigeria to economic prosperity is not truncated by inflammatory utterances or provocative actions down the line”, the forum said.