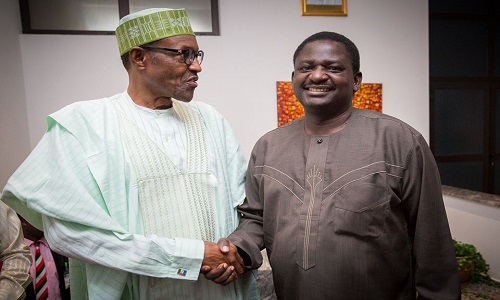 Special Adviser to the President on Media and Publicity, Femi Adesina, has explained why leaders of the governing All Progressives Congress, APC, and those in President Muhammadu Buhari’s cabinet are not being prosecuted for corruption.

Mr. Adesina, who made the explanation while featuring as a guest on a radio programme, Sweet F.M’s Podium in Abeokuta, the Ogun State capital at the weekend, also disabused the minds of those who argue that the APC-led federal government’s anti-corruption war is selective.

According to him, APC chieftains and appointees are not being prosecuted because no evidence had been put forward indicting them of being involved in corrupt practices.

“The onus lies on he who alleges to also prove”, he said. “The fact that any PDP member crosses to APC does not provide automatic shield. Whoever is indicted will be prosecuted”.

On the arrest of judges, Mr. Adesina said the raid on judges was only a raid on corruption and not the judiciary.

“Mr. President has said it all. No one is out to intimidate the judiciary. DSS raid was a raid on corruption not Judiciary”, he said.

Mr. Adesina decried the widespread misinformation that the government had banned the importation of rice.

He also reiterated the Buhari administration’s commitment to diversify the economy, saying the country has gotten to the point where it has no choice but to seek other streams of income.

“We have gotten to the point in which we have to diversify or die,” he said.

“The Federal government has disbursed money so as to heavily invest in Agriculture and Mining.

“Dr. Fayemi has told us that the results of the ongoing investment may not be clearly seen in less than 30 years. However, we will lay the foundation”, he said.

“I was not expecting it. Maybe if I knew, I would have done all in my powers to make sure it did not happen”, he said.

“I have known him since he started contesting and wrote good things about him but I did not know he will appoint me as his adviser”.