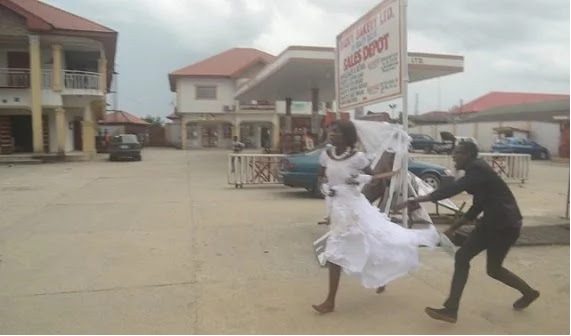 Remember the viral story of the new bride that reportedly fled the venue of her wedding reception, rejecting her would-be-husband in Delta State? A close friend has revealed the real reasons behind the drama.

Roseline, 32, made news headlines for the wrong reasons after pictures of her in a wedding gown apparently running barefooted and a man, who appears to be the groom, following in pursuit, surfaced in the media and blogosphere.

While there are various versions of what transpired, a close friend of the runway bride has told Vanguard that the lady fled because she sighted her true love in the crowd of guests at her wedding reception and decided to follow him.

The anonymous source told Vanguard: “I believe she did what she did because she saw the previous man in her life at the reception. We heard that he had earlier promised to marry the bride, but he later traveled to Lagos and never showed up again. When the bride waited for a long time and he (former suitor) was nowhere to be found, she decided to marry another man, who was ready although she still loved her former suitor. So when her true love showed up at the reception without notice, the woman saw him and decided to call it quits with her husband to follow her heartthrob”.