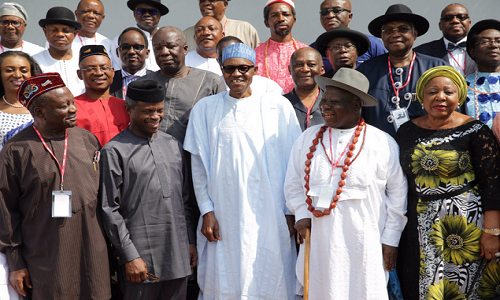 Eminent personalities, leaders and stakeholders from the Niger Delta under the auspices of the Pan-Niger Delta Forum, who earlier today met with President Muhammadu Buhari at the Aso Rock Presidential Villa, Abuja have presented a 16-point demand to him.

The forum said the 16 point demands were where “quick wins” could be achieved to restore hope and confidence in a region that has “grown skeptical of dialogue and engagements that have hardly produced tangible results”.

The demands include allocation of oil blocs to indigenes of the Niger Delta, maritime university, end to military occupation of communities and proper funding of the amnesty programme.

The demands also include extension of Ogoniland clean-up to other areas of the region, employment opportunities for trained ex-militants and support for internally displaced persons in the region.

Other demands are relocation of international oil companies that have their head offices in Lekki and other places outside the Niger Delta, back to their areas of operations, infrastructural development, manpower and human resources development, federalism, among others.

Addressing State House correspondents after the two-hour closed-door meeting with the president, frontline Ijaw leader and former federal commissioner for information, Chief Edwin Clark, said they were well-received by Buhari.

While stressing that they were not at the Presidential Villa for a battle with the president, Chief Clark pointed out that the meeting was a combination of all interest groups in the Niger Delta.

“We have no other country than Nigeria. We cannot continue to destroy the assets of the country and the ecosystem of our environment”, he stated.

The Minister of State for Petroleum Resources, Ibe Kachikwu, said Buhari told the stakeholders that he did not want a quick solution but wanted to dig into what the real problems of the Niger Delta were.

Those that attended the meeting include Vice-President Yemi Osinbajo, some governors, ministers and other political appointees from the Niger Delta region.

The affected governors are those from Akwa Ibom, Bayelsa, Delta, Imo and deputy governor of Rivers.

Others are Service Chiefs, Inspector-General of Police Idris Ibrahim and Director-General of the Department of State Services (DSS), Lawal Daura, as well as traditional rulers and representatives of militant groups.

Ministers that attended the meeting were those of Niger Delta Affairs, Interior, Justice, Transport, Budget and National Planning as well as Minister of State for Health.

The Chairmen, Senate and House of Representatives committees on Upstream, Downstream as well as Niger Delta were also in the meeting.