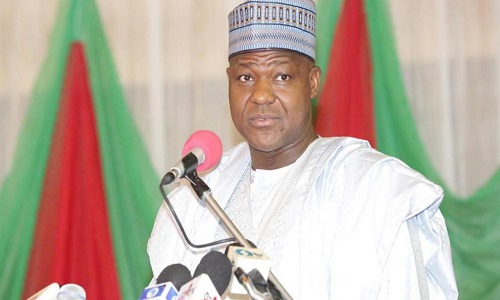 The Speaker of the House of Representatives, Mr Yakubu Dogara, on Saturday said there was no bill before the National Assembly seeking to introduce Sharia legal system in Nigeria.

A statement issued by Turaki Hassan, Mr. Dogara’s Special Adviser on Media and Public Affairs, quoted him as making the remark at a reception organised in his honour by the Northern Nigerian Christian Politicians in Abuja.

Mr. Dogara refuted reports alleging that there was a bill on Sharia before the House.

He emphasised that by the provisions of the standing rules of the House, bills on constitution amendment were referred to the special ad-hoc committee on the review of the constitution.

“The committee has the sole prerogative to introduce constitutional amendment bills in the House.”

He said that a member introduced clauses which sought to include criminal aspects of Sharia in the constitution which was referred to the special ad-hoc committee on the review of the constitution.

“But no such bill has yet emanated from the Committee.

“Before such bill could be passed into law, at least 2/3rd of members of the National Assembly will have to vote yes to it before it is transmitted to the 36 states houses of assembly for endorsement by 2/3rd of them.

“Voting on such clauses are done with individual members voting for or against each clause before it is passed and if any clause fails in either of the two chambers such amendment is considered “dead”.

“And as such will not be voted upon by the other chamber as doing so will amount to waste of time and exercise in futility.

“Even if there is a proposal from this floor that we should embrace ecclesiastical law, we are bound to consider it and by the virtue of our rules, once there is that kind of proposal, we send it to the committee,” he said.

Mr. Dogara said that no individual member had the right to craft a bill that would lead to amendment of the constitution, adding that only the committee had the sole prerogative of drafting such bill.

“In the Senate, I am not aware that such a bill has been presented by the committee.

“In the House, the committee has not submitted any bill. That is where we are.

“It is not only totally misleading but false to say that the National Assembly is seeking to introduce sharia in the Constitution.

“There is no such bill.”

“I want us to get this thing clear because it is a point of contention in the Christian community not only in the north but even in the south.

“I feel I have the duty as the Speaker to explain this even though I had explained it on the floor of the House before,” Mr. Dogara said.