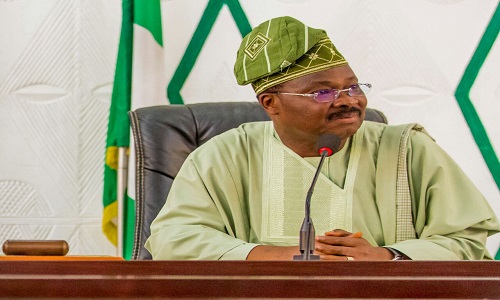 The Oyo State Government has announced the immediate slash of salaries and entitlements of all political appointees in the state by 50% owing to the prevailing economic situation in the state especially, and Nigeria in general.

Secretary to the Oyo State Government, Mr. Olalekan Alli, who made the disclosure while addressing journalists at the state secretariat in Ibadan, said the slash takes immediate effect.

“The slash in salary is for all political appointees starting from the Governor, Deputy Governor, Commissioners, Special Advisers, Senior Special Adviser, among others. This was approved by the ‎governor along with his cabinet members at the last executive members meeting. This will also include slash in government expense profile, and compensation of political appointees”, the SSG said.

Mr. Alli, who noted that even Governor Abiola Ajimobi would not be excluded from the slash, expressed hope that the restructuring exercise and effort of the state government to block all loopholes would impact positively on the state Internally Generated Revenue.

The SSG also disclosed that the state government had almost completed a ten thousand metric tonnes of Silo at Oyo town, with the intention of replicating same across all senatorial districts in the state, to guarantee food security for citizenry.

While pointing out that current verification exercise to restructure the civil service has revealed several anomalies in the system, Alli assured that government would not relent in addressing all systemic anomalies while maintaining cordial relationship with the state labour union.