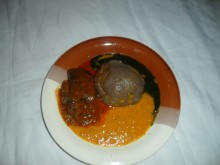 Three more people that partook in a deadly cassava flour meal in Ogaminana area of Okene in Kogi State, have lost their lives.

Two of them, a 42-year-old woman and 10-year-old boy, died on Thursday at the Federal Medical Centre, Lokoja, the acting Chief Medical Director of the hospital, Olatunde Alabi, told journalists.

Mr. Alabi said three victims of the cassava flour meal were rushed to the hospital in critical condition on Wednesday morning from Ogaminana, Adavi Local Government Area, but two of them died Thursday morning.

Mr. Alabi said the third victim, a girl of about 13 years, is in critical condition.

The chief medical director confirmed that seven people actually died between Monday and Tuesday, and not six as speculated.

According to him, the cause of the deaths was yet to be ascertained. He said the hospital suspected cyanide poison from the cassava meal.

“Clinically, we are saying we are suspecting cyanide poison,’’ Mr. Alabi said.

He said the hospital staff did their best to save their lives but the worst still happened.

He said the state government appeared determined to ascertain the real cause of the death of the people as it has decided to send the blood samples of the victims for detoxincology test in South Africa.

The News Agency of Nigeria (NAN) recalls that a woman, three of her children and three of neighbours’ children lost their lives between Monday and Tuesday, after a meal of cassava flour.

The woman was said to have brought the cassava flour from her farm at Uhuepe village on Sunday, from which she prepared a dinner (white amala) for her family.

She also extended the meal to the children of her neighbours.

The woman and three of her children died in their house on Monday, while the three children of their neighbours who partook in the meal died at the Okene General Hospital the next day.