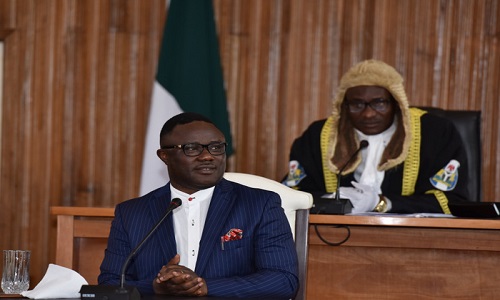 The Governor of Cross River State, Prof. Ben Ayade, has said he preferred his former position as a senator to being governor of the state.

Ayade, a member of the 7th Senate, was drafted by his predecessor, Senator Liyel Imoke, to contest the 2015 governorship election, which he won convincingly.

Though a one-term senator, Mr. Ayade was one of the leading voices in the 7th Senate and sponsored a total of 41 bills.

Reminiscing on his tenure as a lawmaker, the governor said that his potentials were better harnessed and exhibited when he was a senator.

He said that prior to becoming a governor, he had wanted to return to the Senate, but was persuaded to contest election for governor of Cross River.

Gov. Ayade, who made these remarks when he presented the 2017 budget of N301bn to the House of Assembly, emphasised what he called his “deep seated passion for the people”.

Ayade said that though he dreamt of becoming governor as a child, he truly preferred being in the Senate.

“Even though my deep seated interest was in returning to the Senate, I was persuaded to run for the governorship”, he said.

“I saw it as an act of God because I had always nursed the ambition and prayed God to grant me that opportunity to lead and provide for my people. I feel that one day I shall still return to the Senate”.

The 2017 Appropriation Bill christened “Budget of Infinite Transposition” by Gov. Ayade, seeks to achieve three cardinal objectives of “improving and expanding infrastructure through Public Private Partnership, planting the ‘tree’ of the state future revenue generation and gradual industrialization of the state”.