Upload your freestyle football moves and tag #QatarAirwaysCup for a chance to win tickets to the Match of Champions in Doha on 13 December. FC Barcelona takes on Al-Ahli SC in once-in-a-lifetime Qatar Airways Cup 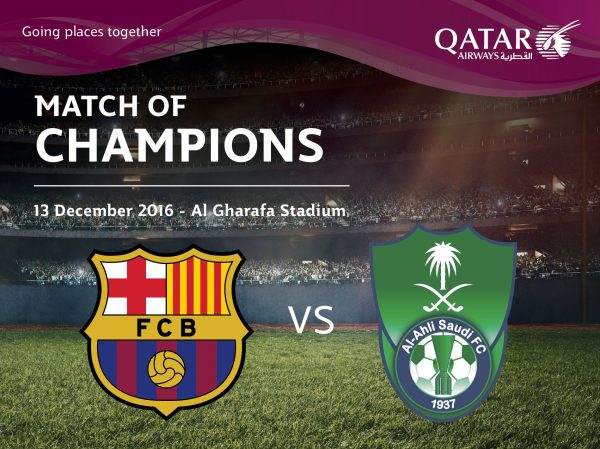 DOHA, Qatar – Qatar Airways invites football fans from around the world to showcase their best freestyle moves and post them to social media using #QatarAirwaysCup, to be in with a chance to win a pair of tickets to the Match of Champions in Doha on 13 December.

The Match of Champions pits FC Barcelona, one of the most successful football clubs in the history of the sport, against Al-Ahli SC, one of the most beloved clubs in the Middle East and recent winner of the Saudi Professional League, Saudi Super Cup and the King Cup. Qatar Airways is the official airline of both clubs, who will go head to head at Al Gharafa Stadium in Doha on 13 December 2016.

Show your football skills by creating a fifteen second video that you can share using #QatarAirwaysCup on Twitter, Instagram, or Facebook. You can also submit your video through the online application on www.qatarairways.com/qrchallenge. A Qatar Airways committee will choose the winners.

Qatar Airways Senior Vice President, Corporate Communications and Marketing, Ms. Salam Al Shawa, said: “This competition is a special gift to all of our travellers, and millions of social media fans across the world who love football. Professional players from both FC Barcelona and Al-Ahli SC, such as Lionel Messi and Omar Al Somah, inspire millions of football enthusiasts around the globe. With this Qatar Airways Cup competition fans will have great fun showcasing their own skills for the chance to win a dream come true, and travel with Qatar Airways to be a part of the Match of Champions. The game, between our two favourite teams, FC Barcelona and Al-Ahli SC, will be a memorable occasion for us all, and I can’t wait to see who will be joining us to cheer on the teams.”

Qatar Airways flies to more than 150 destinations on six continents, one of the world’s largest airline networks. Through this vast network, the airline connects nearly 30 million people a year, through its hub and home, Hamad International Airport, itself the official airport of FC Bayern-Munich.