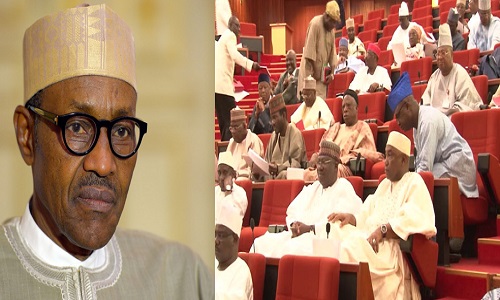 Briefing newsmen shortly after plenary, Ndume, who said that he was shocked that the request suffered such setback, expressed optimism the issues would be resolved and the request would be re-presented.

“I am going to appeal to my colleagues to take a look at it again and see how we are going to bring it back.

“One of the technical things that were missing is that in the letter, if you read it, says: ‘attached is a draft’ but there was no attachment.

“So, these are some of the lapses that we will look at in bringing it back.

“We were thinking that there were going to be details but there were no details of the borrowing plan.

“I believe that those will be included in the next one”, he said.

The lawmaker said that the red chamber did not have the power to give anticipatory approval of any bill or document that it had not received.

He assured that the senate was poised to do things the right way and would reconsider the request on its merit.

“We are trying to do things the way it should be done this time around, but we cannot throw away the baby with the bath water.

“In the Appropriation Act we approved that the budget will be financed through internal and external borrowing.

“The internal borrowing is going on; we also approved external borrowing, so we will look at these areas that are necessary for the funding of the budget”, he said.

Ndume could not give a specific date or period within which the president was likely to represent the request, but assured that he was going to interface with him.

“I cannot tell you now when it would be represented; I, as a leader, I am in contact with the executive which I try to market in the senate.

“As I told you, I was shocked by the decision; my colleagues surprised me today. I was not expecting that.

“If I had a little inclination that such a thing was going to happen, I would have tried to market the request or at worse, I will not present it.

“Today, the senators had their way and I had my say”, he said. (NAN)