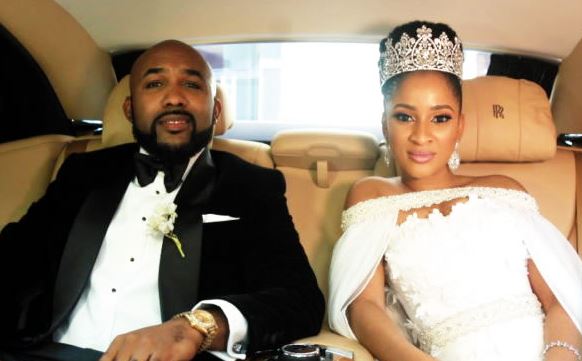 When would-be mother in-laws are undisguised enemies, the bride and the groom are in serious trouble. Guests too must be prepared for the worst, as shown by star actresses, Sola Sobowale and Ireti Doyle, in a new movie, The Wedding Party, screened in Lagos on Thursday.

In the film that sparks laughter from the beginning to the end, Sobowale is the mother of the bride (Dunni, played by Adesewa Etomi), while Doyle is that of the groom, Dozie, played by popular artiste, Banky W.

The film is a collaboration between Ebony Life, Film One, Konga Studios and Inkblot Productions.

Like many other young lovers, Dozie and Dunni are determined to prosecute their relationship in a way that will translate into a wonderful marriage — to the extent that they make a covenant to protect their chastity till the first official night. Anyway, the snake-in-the-grass Dozie violates this oath but, somehow, love wins each time Dunni catches him playing games, including the day he finds the underwear of another lady in his pocket.

The rivalry between the mothers-in-law is thus the soup pot on which the director, Kemi Adetiba, who proves that she is a professional to watch, based on how the movie is executed, feeds fat. The rivalry hits the climax when the two women want to outdo each other during the wedding show.

Whoever has been following Sobowale’s career is likely to give her victory in such a scene even before the match. Apart from being a very emotional performer, she is one actress that can easily grow larger than life. She justifies the producers’ confidence in her in this regard.

Because they (producers) make no pretence about making a hilarious film, they also load it with star jesters that include Ali Baba (Dunni’s father), Ayo Makun (MC), Lepacious Bose (Dunni Mum’s friend) and Afeez Oyetoro a VIP guest. In the midst of such clowns, a veteran such as Richard Mofe-Damijo, who is the groom’s lecherous father, is bound to become a comedian of some sort. In this wise, The Wedding Party is a bold way to show film as first and foremost a piece of entertainment.

Yet, the movie is a plus for Nigerian tourism and culture as it showcases what can be described as the best of the country’s fashion, food, music and dance — forget about the fact that pickpockets are also at work during the wild, wild party.