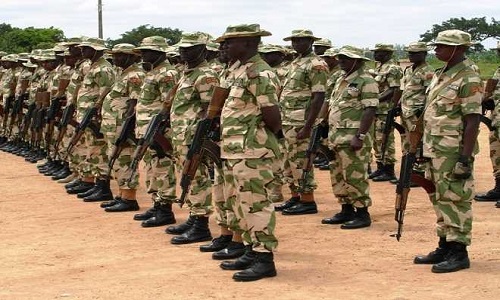 Troops of the Operation Delta Safe in the Niger Delta have freed nine kidnap victims, impounded 56 bags of Indian hemp, and arrested two suspected drug dealers during an operation.

Olaolu Daudu, the Coordinator of the Joint Media Campaign Centre of Operation Delta Safe, told the News Agency of Nigeria in Yenagoa on Saturday that measures had been put in place to restore peace in the region.

According to him, troops of Sector 3 resolved a major fracas between the youth of Ayama village in Aladja community of Warri South West in the process of which one Sunday Obuche of Ayama Community was killed.

Mr. Daudu noted that the presence of troops forestalled the degeneration of the crisis and further loss of lives.

He stated that the corpse of Mr. Obuche has been deposited at the Oviam Aladja Police Station while a meeting with the warring factions will be held to forestall reprisal attacks.

The spokesman also said the troops rescued three indigenous staff of LEX Oil, who were kidnapped on November 3 at Ikuru town in Andoni Local Government Area of Rivers.

“The operation led to the arrest of one Moses Eni and Mrs Boyi Kamanda with 55 bags of substance suspected to be Indian hemp recovered.

“The items are in the custody of the NDLEA office in Kwale, Delta State,” Mr. Daudu stated.