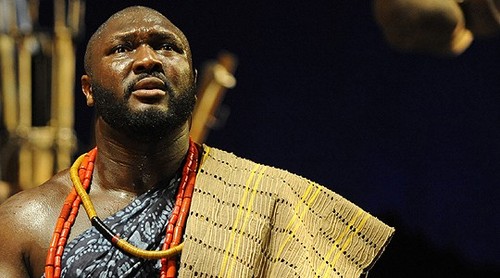 “You are not my father”, that was the last statement from Olounde, a medical student in England, who returned home to bury his father, Elesin Oba, but found out that he was still alive.

Olounde, full of disappointment, committed suicide to fill the void left by his father as a result of his reluctance to fulfil age-long tradition.

The tradition demands that Elesin Oba must commit suicide before the burial of the late Alaafin of Oyo in order for his (Elesin) spirit to clear the way for the transition of the monarch and forestall imminent danger on the community.

The Elesin later took his own life in captivity after being presented with the corpse of his first son (Olounde) by the reactive natives.

All these played out on Sunday night in Lagos at the command performance of one of Nobel Laureate, Prof. Wole Soyinka’s iconic plays “Death and the King’s Horseman”.

The play, written 40 years ago, which won Africa its first Nobel Prize in 1986, was performed by the National Troupe of Nigeria and directed by Mr Mike Anyanwu.

The Minister of Information and Culture, Alhaji Lai Mohammed and other prominent personalities in the creative industry attended the event.

Speaking about the play, Anyanwu said the theme was relevant to the present day of Nigeria where the youths were adrift with vanity and selfish tendencies.

The Play director urged youths to “emulate Olounde’s choice of honour, self-sacrifice and patriotism rather than his father and Pilking’s dialectics of selfishness, arrogance and sacrilege.”

According to him, the play also demonstrates the tragic human frailty when in direct confrontation with the imminence of death.

Anyanwu likened the vain desire and indulgence of Elesin to the wide spread embezzlement of national wealth by a minority at the expense of the majority of Nigerians.