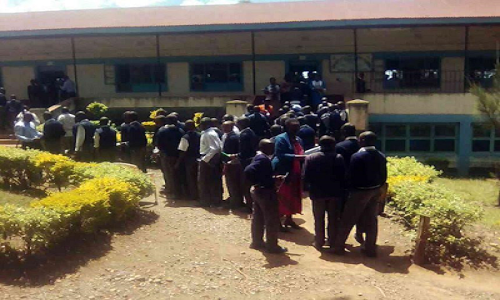 A student has been confirmed dead as a result of hypertension, two hours before his mathematics examination at the Jomo Kenyatta High School.

The student, whose identity was revealed as Francis Gikonyo, was preparing to sit for the Kenya Certificate of Secondary Education, KCSE, on Monday when he passed away.

The student was rushed to the district hospital in Nakuru after he was found critically ill, but on getting to the hospital, he collapsed and died.

Confirming the incident, the deceased student’s principal, Mr. John Mureithi, noted that Francis had been unstable at school for the better part of the year.

In a statement, the principal said: “It is very unfortunate that we lost a young and brilliant boy who had a bright future, the student had a chat with medics before collapsing and dying, adding he died from hypertension”.

Mr. Mureithi also confirmed that the student’s parents were informed of his death and counselors were invited to break the news to his classmates.