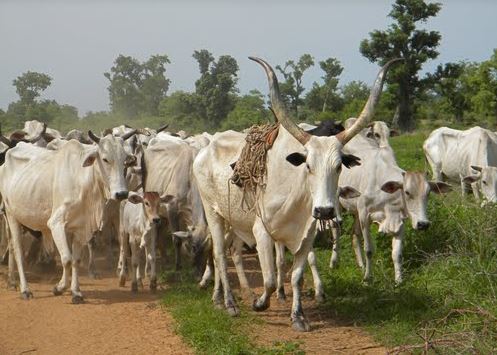 The Ogun State Police Command has arrested two herdsmen for allegedly killing another herdsman in an attempt to steal his cattle at the Itadodo area of Ofada in Obafemi- Owode Local Government Area of the state.

The suspects were Abdulahi Anaruwa and Mohammed Suleiman while their victim was Garuba Mohammed.

The incident was said to have occurred on Tuesday October 28, 2016.

The deceased met his untimely death while grazing his cattle with the two suspects.

They allegedly lured him into the nearby bush and hacked him to death.

The state Police Public Relations Officer, Abimbola Oyeyemi, said the suspects ran out of luck when a motorcyclist passing by saw them and alerted the people of the area.

He said the people of the area later called the police.

Oyeyemi, an Assistant Superintendent of Police, said after the call, the Divisional Police Officer of Owode Egba Division of the command, Sheu Alao, led his men to the scene and the two suspects were arrested.

He said, “The Commissioner of Police, Ahmed Iliyasu, has ordered the immediate transfer of the suspects to the homicide section of the State Criminal Investigation and Intelligence Department, Eleweran, Abeokuta, for further investigation. ”

“The CP further warned that crime and criminality will have no place in Ogun State and that those who are hell bent in committing crime will have the ever ready police command to contend with.”