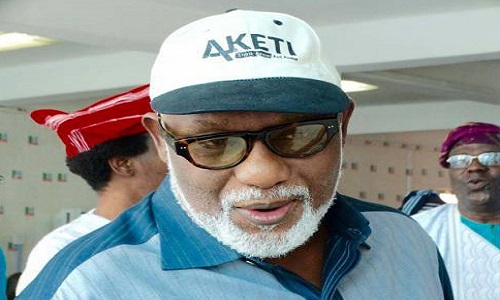 The Ondo State Governor-elect, Rotimi Akeredolu, has debunked an online report which alleged that the Minister of Mines and Steel Development, Dr Kayode Fayemi, paid N1 billion to the incoming governor to appoint his wife, Erelu Bisi Fayemi, as Secretary to the State Government, SSG, in Ondo State.

Refuting this allegation in a statement by his media adviser, Yemi Olowolabi, the governor-elect stated that the tone of the allegation represented the stream of earlier ones being launched in Ekiti State against former Governor, Kayode Fayemi, stressing that “acrimonious, wicked and irresponsible publications have no place in Ondo State politics.”

An online platform had alleged that Erelu Fayemi donated trailer-loads of rice to Akeredolu during the campaign while the minister donated N1bn to the APC candidate to enable him pressure the governor-elect to seek SSG position for his wife in form of compensation.

But Akeredolu denied receiving such donations from any one, including the Fayemis, urging mischief-makers to leave the minister and his wife out of unfounded allegations aimed at tarnishing their names.

According to the statement, “It is regrettable that some lazy and irresponsible individuals can just sit down in a corner to cook wicked allegations against innocent people.

“This trend of allegations against Fayemi started in Ekiti State after Captain Sagir Koli revealed in an audio tape how Governor Ayodele Fayose allegedly stole himself to power through treason, which the governor denied until principal actors started confessing to the crime.

“Since then, there has been a trend in which Fayemi is painted as a super rich who donated N1.5b to President Muhammadu Buhari’s election campaign and now N1b to Akeredolu from his bottomless pocket as if a billion naira is what can be wrapped in an envelope and dashed out as a gift.

“Neither Fayemi nor his wife has ever demanded any position from Akeredolu. Both Fayemi and Akeredolu abhor such as activists. In fact, the woman is at present preoccupied with her women advocacy job around the world, so much that she would have no time for local political activities.”

Asking mischief-makers to leave the Fayemis out of the pains of rejection at poll, Olowolabi said: “We appreciate the fact that the pains of post-defeat trauma can be debilitating and sometimes malignant, such trauma should not degenerate into taking away our humanity to launch wicked lies against innocent people.

“Or is it not laughable that some irresponsible irritants would present a picture allegedly in Ondo State that Fayemi’s wife used to attend night club in Ado-Ekiti and would want decent people to believe such a disingenuous and senseless allegation when it is common knowledge that Erelu Bisi Fayemi is a world-class woman of grace and honour, completely unsusceptible to the antics and pleasure principle of merry-makers in government who have turned the Government House to a play-house for revellers and sensualists.

“Fayemi has no millions let alone billion to be given out for an election victory that can go either way and he and his wife have never, never spoken to Akeredolu about ceding any position to anyone. Neither has Erelu Fayemi spoken about any senatorial ambition.

“The devious plot to present a malicious story as coming from APC in Ondo State is not only condemnable, it is also a shame to the writers who have shown themselves as lacking in integrity, honour and grit to squarely resolve the problems that plague them instead of maligning innocent people to vent their anger over election loss.”