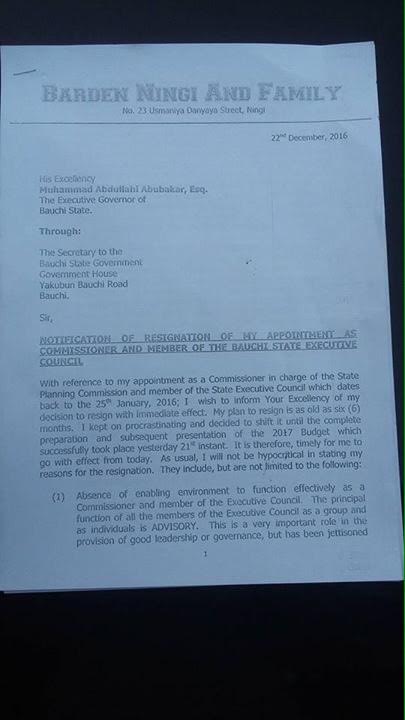 The Commissioner for Budget and Planning in Bauchi State, Shehu Ningi, has stepped down from his position following a scuffle between him and Governor Mohammed Abubakar.

Mr Ningi who resigned a day after Gov Abubakar presented the 2017 budget to the state’s House of Assembly said his decision to resign was based on the fact that the governor never listens to advice from his cabinet members.

In his resignation letter sent through Mr Bello Illelah, the Secretary to State Government, the former commissioner stated that the environment in which he could exercise his advisory role as member of the State Executive Council had been “unaccommodating, debilitating and non-adviser friendly.”

He said Gov. Abubakar had adopted a “hostile, aggressive and intimidating” posture that scares virtually all members of the cabinet from offering “good, frank, sincere and honest advice”.

“It appears Your Excellency prefers to listen to illiterates and sycophants. Your Excellency, this sycophancy is your creation. Consequently, everybody is now compelled to tell you what you want to hear,” he explained.

The Commissioner said the Bauchi state executive council had been turned into a “rubber stamp” for the governor.

“I’m sure Your Excellency cannot recall the number of times you shouted at me merely because I offered simple suggestions and piece of advice.

“Your Excellency may wish to know that it has become a culture for top government officials to discuss their ordeal in their respective interactions with you and the embarrassment they receive,” he said.

Mr. Ningi also said he left because of the “unwarranted, unjustified and deliberate marginalization of himself and his group whose contributions to Governor Mohammed Abubakar’s victory in both primary and general elections have been deliberately underrated and even forgotten”.

He said despite being a key member of the governing APC in the state and his constituency, he was not consulted when members of the caretaker committee of his local government council were being appointed.

He said it was a heavy a “political exclusion and negation of the principle and practice of corresponding reciprocity” on the part of Gov. Abubakar.

He also gave as his reason for resignation, the “unnecessary and avoidable intra-party crisis in the APC in the state”.

He said the crisis within the APC will cost the party dearly in the 2019 election.

The former commissioner also accused the governor of frustrating several efforts made to resolve the crisis within the APC.

Mr. Ningi also blamed his resignation on the marginalisation and relegation of his Ningi emirate, especially as it relates to appointments and provision of developmental projects.

The former commissioner expressed the hope that his resignation would encourage Gov. Abubakar to embrace and practice the “Change Begins with me” campaign of the APC administration at the federal level.

He however expressed gratitude for the opportunity given to him to serve.

But reacting to Mr. Ningi’s resignation, the state commissioner of finance, Garba Akuyam, described as “baseless, malicious, false and unfounded” the reasons for resignation given by Mr. Ningi.