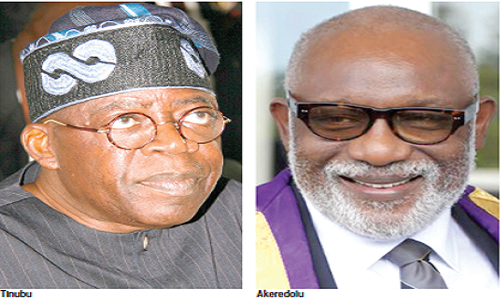 The newly elected governor of Ondo State, Chief Rotimi Akeredolu has cleared the air over the omission of Asiwaju Bola Ahmed Tinubu, the national leader of the All Progressives Congress, in his victory speech on Sunday.

Akeredolu in an interview with State House correspondents at the Presidential Villa, Abuja, shortly after he and his deputy Mr. Agboola Ajayi, met with President Muhammadu Buhari said having acknowledged the president who is the recognized national leader of the party and the National Chairman, Chief John Odigie-Oyegun, it invariably means he had acknowledged all the party’s leaders.

He explained that there’s no love lost between him and Tinubu and that they both maintain a cordial relationship, but, if he had mentioned his name, he would have been obligated to mention the names of about 37 other leaders of the party

“On the names that were mentioned in my speech when expressing gratitude and that I didn’t specifically thank Bola Ahmed Tinubu. I thanked the President and the leader of our party profusely for the leadership which he showed leading to this election.

“I also thanked our indefatigable chairman for standing by the truth and for his position on this matter that led to this election. I have no reason to do otherwise,” he said.

“Party structure, to the best of my knowledge, is very clear. You have the leadership of the party and that is represented by Chief John Odigie-Oyegun.

“After an election, a chief executive emerges, he becomes a leader of the party, you don’t have to personalize and be looking for leaders all over the place.

“If we have to do that, then I will have to mention 36 or 37 leaders. So, I believe the leadership as represented by the President covers all leaders and that tells me it would include Chief Bola Ahmed Tinubu, it would include even Baba Akande, (Ogbonnaya) Onu, and so many leaders.

“But President Buhari is the leader of the party. So, that is my position there.”

Akeredolu, however, added that Tinubu remained one of the leaders of the party, noting that he (Tinubu) had since sent congratulatory message to him after he won the election.

“For me, as a person, I believe he is one of the leaders of the party and I don’t see any strained relationship between us. And you would observe that he has sent in his congratulatory message after the election, so what else do you expect?” he queried.