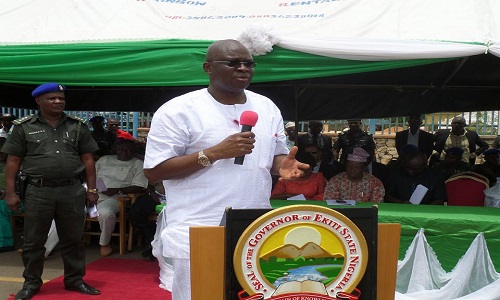 The Governor of Ekiti State, Mr Ayodele Fayose, will, on Tuesday present the 2017 budget to the State House of Assembly for approval.

A statement by the chairman of the House Committee on Finance and Appropriation, Hon Jeje Samuel, said the presentation would take place at the main chambers of the Assembly at exactly 11.00 am.

Speaker of the House of Assembly, Right Honourable (Pastor) Kola Oluwawole, commended Governor Fayose for the prompt and timely preparation of the budget, avowing that the Assembly was expecting the document, adding that the House would do a thorough job on it before passing it into law.

His Special Assistant (Media), Stephen Gbadamosi, quoted him as saying; “We are happy that the budget is coming early. That is in tandem with Mr Governor’s avowal that he will take the matter of the people in the grassroots more seriously in the coming year. We will be happy to receive the document.

“And we assure the people of the state that we will do a thorough job on it and pass it as appropriate.”