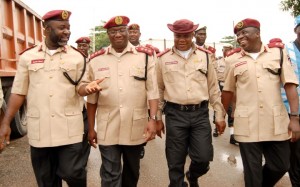 The News Agency of Nigeria (NAN), reports that the corps had embarked on ‘Embers months’ safety campaign in various Unit Commands across Lagos State.

Mr Olatunji Oguntoye, the Surulere Unit Commander, told the Motorists at Ijora Motor Park in Lagos on Friday during the ember months’ safety campaign tagged “Crash the Crashes: Speed Kills’’, that crashes would be reduced.

He said efforts were in place by the corps to reduce crashes to the barest minimum during the festive season.He added that FRSC had embarked on public enlightenment on speed limiters and other factors that cause crashes.

“The time is apt and the corps is introducing Speed Limit Device to compliment efforts in combating crashes.

“With the installation of the speed limiting device, it presets categories of vehicles to specify speed in accordance with
National Road Traffic Regulations and no drivers can exceed the preset speed.

“By that, we have crashed the potential crash’’, he said.

The FRSC said 50.8 per cent of road accidents were caused by burst tyres.

Mr Saddiq Abdul-Rahman, the Unit Commander of Lagos Island, said during the campaign at Obalende Motor Park that the campaign was aimed at reducing crashes during and after the festivity.

Abdul-Rahaman said the campaign was aimed at educating motorists on safety.

“We are collaborating with the Nigeria Custom Services to ensure that imported tyres are banned in the country to avoid crashes usually caused by tyre-burst.’’

He urged drivers to avoid overloading which puts pressure on the tyres.

“The FRSC throughout the country will ensure that fewer crashes were recorded during the `ember’ months.

“We have doubled our efforts to ensure our roads are safe during the festive period”, he added.

Mrs Adejoke Fadairo, head of Somolu unit of FRSC said many drivers had no licence based on assumption that the process was cumbersome.

“It is not difficult to procure driver’s licence in Lagos State especially in Somolu-Bariga area office.

“We work on Saturdays and even on Sundays to clear the backlog and now we are back, better and bigger.
He said there were negative implication of driving with fake license and could not be wished away.

Fadairo advised motorists to drive safely during and after the festive period.

She said a good driver must have self confidence on the wheel and avoid driving under the influence of alcohol.

NAN reports that Mr Hyginus Umeje, the Lagos State Sector Commander, stressed the need for motorists to undergo medical checkup before embarking on journey during the festive period.