The general superintendent of the Deeper Life Bible Church, Pastor William Kumuyi, yesterday said that, in 2017, God would grant President Muhammad Buhari the solution to the numerous challenges facing the country.

Kumuyi gave the assurance while speaking with newsmen when he played host to the Speaker, Lagos State House of Assembly, Mr Mudashiru  Obasa, who had led some members of the Assembly on a courtesy visit to the church’s December Convention. 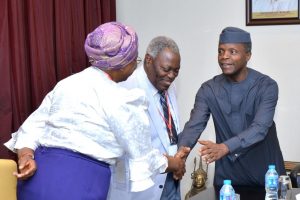 The cleric said, “We talk of the hours of recession, difficulty, distress and all that, but God is granting us His promises. We are not going to carry over our problems. We pray and believe that the Lord will answer.

“As you will see, as we get to the New Year, there is no carryover of our problems. God will give solutions to the problems of our lives, families, communities, the state and our nation.”

The pastor said that with prayer and faith in God, the country would get through all its challenges, including the economic recession.

The founder of the church said that God created “us and wants everything to be sufficient for everybody.’’

Meanwhile, addressing the congregation of thousands of worshippers, Obasa, urged all Christians to show love to their neighbours, adding that the state was committed to fight unemployment among the youth.

He said that the newly created Employment Trust Fund would help reduce joblessness by providing soft loan with little interest for enterprising people of Lagos state.

“We must go beyond religious demarcation and show ourselves that we are brothers and sisters. Let us love one another. We should extend hands of fellowship to our neighbours,” the speaker said.

Obasa, who urged churches to pray for the state and nation, said that the state was passionate to give good governance and improve the economy of the state for the benefit of all.

He expressed delight over the warmth reception accorded his team by the leadership of the church.

NAN reports that the speaker the Deputy Majority Leader of the House, Mr MuyiwaJimoh and the Chairman, House Committee on Environment, Mr DayoSaka-Fafunmi were among the team.

NAN reports that the four-day, nation-wide convention, which started on Dec. 23 and expected to end on Dec. 26, is tagged, “Power for the Present Hour”.