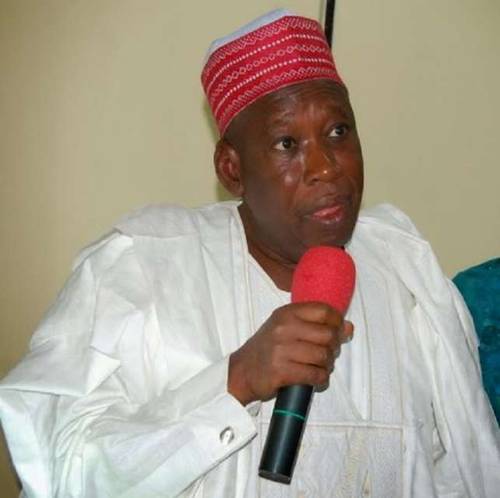 Governor Abdullahi Ganduje of Kano State on Friday briefed President Muhammadu Buhari on emerging security challenges in the state occasioned by increasing influx of Boko Haram insurgents into Falgore forest in the state.

Ganduje was reacting to questions from State House correspondents after a closed door meeting with President Muhammadu Buhari in the Presidential Villa, Abuja.

“I came to brief Mr President on the security situation in Kano especially on the fallout from the North Eastern part of this country in which some of the Boko Haram (insurgents) kidnappers will like to dominate Falgore where they will be operating to other parts of the North Western part of the country.

“So, the security agencies are working very hard and a lot of arrest had been made, investigation is going on.

“We will not allow them to dominate Kano and to make it as a launching pad.

“Certainly, we expect if they are dismantled from the North East part of this country they will find another location and Kano being an older city, is an attractive place for such elements to come in,’’ he said.

According to him, security agencies have apprehended three persons believed to be leaders of the criminal group.

He said the APC would ensure a free and fair election in the state.

“We have fresh ideas even though the environment in Rivers is quiet different. We are consulting, we are coordinating and this time around, like in Ondo state, we must ensure free and fair election.

“You know in that part of the country, having free and fair election is not normal and we must make it normal this time around. We must make sure that there is security so that people can come out and vote and vote the person they like.

“That is our main preoccupation at the moment. We are making wider consultations with stakeholders and we believe we will succeed,’’ he said.