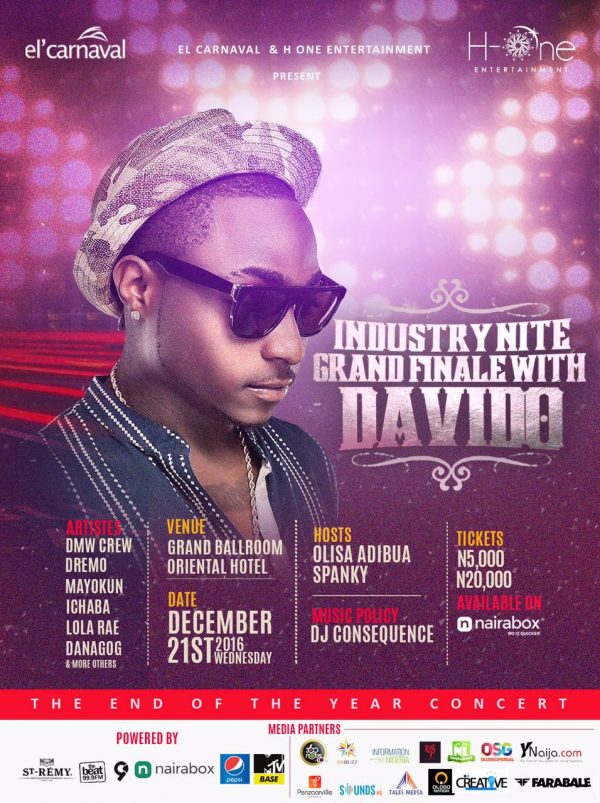 In 2008 Industry Nite launched as a weekly event to provide a platform for artistes to showcase their talent and network.  Over the years It has been recognized as the most consistent and biggest mid-week show in Nigeria that vigorously celebrates urban contemporary music.  Industry Nite has held in prestigious venues like Coconut Grove, Saipan, Tribeca, Oriental Hotel, Get Arena amongst others.

Time and time again Industry Nite has proven to be the only independent platform that has held national and International tours hitting cosmopolitan cities across the globe on a quarterly and monthly basis. Houston, New York, London, Accra, Dubai, South Africa, Ghana, Cotonou Abuja, Ibadan, Ilorin, Calabar, Port Harcourt, Enugu and Benin city are cities Industry Nite has showcased the best of Nigerian music creating a worldwide network of industry professionals, musicians, promoters, club and venue proprietors who promote African music and have the attention of key influencers in their cities.

“Last year’s special with Wizkid which is the first grand finale blew our minds, it was way more than we envisaged. This year expect a ground breaking experience with Omo Baba Olowo himself OBO and this will be the first concert to host the entire DMV label, trust us you don’t want to be told about this. As always El’ Canaval presents this year’s Industry Nite special but this time in partnership with H-One Entertainment a highly rated international entertainment and events company.  We are proudly supported by St. Remy, Cloud 9, Naira Box, Beat FM and Pepsi…” said Mr. Matthew Ohio the convener of Industry Nite.