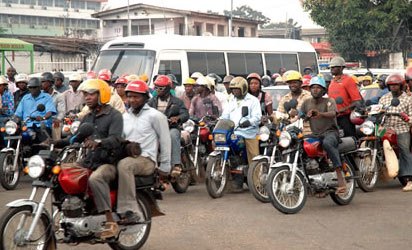 The honeymoon is over, its time to wield the big stick. Lagos State Government yesterday said it is beginning full enforcement on commercial motorcyclists, popularly known as okada riders from plying the restricted 475 roads across the state.

In recent time, okada riders have taken over the state’s highway in flagrant disregard to the Road Traffic Law restricting them from plying major highways in the state.

For most parts of the second term tenure of the immediate governor of Lagos, Babatunde Fashola, okada riders were harassed and hounded on Lagos roads by policemen and all other law enforcement officers, including local council officials. But shortly before the 2015 general elections, like a beautiful bride, politicians, political parties and their affiliates were falling over themselves in a desperate attempt to secure the support and loyalty of commercial okada riders ahead of the elections.

In particular, the Support Group For Ambode (SGFA) ahead of the elections distributed a campaign leaflet tagged OKADALLOWED sticker, which read: “You can ride okada on 9,000 roads and stay off 475! Yes you can.”

However, at a joint press conference yesterday in Ikeja, addressed by the state government and the police, Acting Commissioner for Transportation, Prince Anofiu Elegushi, warned that government would no longer tolerate okada riders on restricted roads, highways and bridges.

“We will not condone okada riding against traffic, especially those who ply their trade along Lagos-Abeokuta Expressway and Ojota-Ikorodu Town and who use BRT restricted/reserve lane. All these are not in sync with the law. There is a need for us to, at this time, restate the provisions of the law so as to understand the premise of our planned actions in this regard,” he said.

“In line with this administration’s plan to build a Lagos that works for all, we are determined to engage with unions/associations of tricycle operators and okada operators to ensure their members engage with us in the process of ensuring public safety.

“Our present concern is also borne of the need to prevent accidents resulting from okada which is on the increase currently. By implication, there are increased (death) cases of causalities or maiming resulting therefrom; there is a surge in driving against traffic by okada. We are also witnessing a huge increase in motorcycle-related crime,” he added.

Some weeks ago, The Guardian had reported that the gradual return of commercial motorcyclists to major streets in Lagos, including expressways, where they were barred from plying a couple of years back, appears to come with its downside, which is an escalation of criminal activities, such as phone and bag snatching, and armed robbery.

Some road users, who spoke to The Guardian, said the hoodlums operate in the early hours of the day, where they torment those that venture out early for their businesses, and those returning home from night engagements, including work.The rider and his accomplice, apart from being armed with guns, and other dangerous weapons, also carry sharp scissors with which they briskly cut off the straps of their victims’ bags, and zoom off even before an alarm is raised.Areas like Surulere, Anthony Village, Apapa, Ikeja, Isolo and Mafoluku, have continually witnessed the menace of these daredevil robbers.

Paulina Mathew, a victim of Okada robbers narrated how two men on a motorcycle accosted her early in the morning as she headed for the market, and dispossessed her of her handbag and cash.

Commissioner for Information and Strategy, Steve Ayorinde explained that out of the 9,000 roads in Lagos, okada riders were only restricted from plying 475 roads, while they could ply the rest.

A representative of the state Commissioner of Police, ACP Imohim Edgal, said policemen in all area commands in the state have been directed to enforce aggressively the restriction placed on okada riders from plying the restricted routes.

Mathew said: “Okada riders have assumed the proportion of a serious epidemic in the society. They do not have regard for the law, or obey traffic lights. Apart from the social menace, which they constitute, they are also highly involved in criminal activities; they engage in armed robbery and bag snatching.”