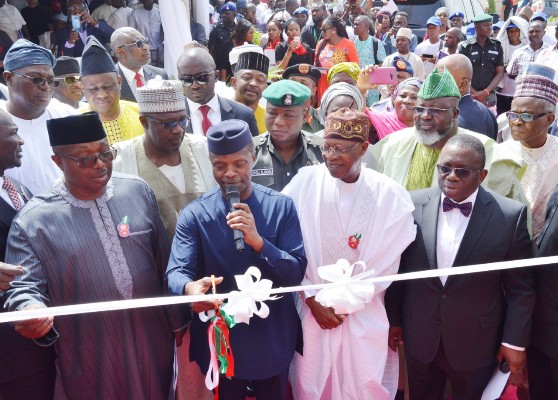 Vice President Yemi Osinbajo on Thursday launched and rolled out  Digital Switch Over (DSO) on behalf of President Muhammadu Buhari. The project is spearheaded by the Ministry of Information and Culture and the National Broadcasting Commission (NBC).

Buhari said Nigeria is “irreversibly committed’’ to meeting the June 2017 deadline for transition from analogue to digital television broadcasting.

The June 17, 2017 deadline for transition from analogue to digital television broadcasting in West African countries was set by the World International Telecommunication Union Council.

Buhari, said that with DSO, the country stood at the threshold of exciting time for free TV channels, jobs creation, entertainment and commerce.

He stressed that digitization would create jobs in the area of contents, software development and production of Set Top Boxes.

The President added that digitization would provide platform for film producers and musicians to release their production directly to the platform that will substantially curb piracy.

“ As the doors open for digital transmission, what is important is that it will liberalize access to and increase the versatility of media information.

The President assured that the DSO rollout would continue in the states until the entire country was covered.

He appealed to states and Local Government Councils to be actively involved in the projects because of its advantages to the people.

The President congratulated the Minister of Information and Culture, Alhaji Lai Mohammed, the managements and members of staff of NBC and the signal provider (Pinnacle Communications) for excellent performance on the Abuja switch over.

Sen. Suleiman Adokwe, the Chairman Senate Committee on Information and National Orientation, said DSO would leverage for Nigerians who could not afford Pay-TV like DSTV and Startimes.

Adokwe added that with 30 free TV channels, DSO would democratise television viewing for the masses by allowing them freedom of choice from many options.

He assured that the National Assembly would continue to support the project and ensure its benefits to the masses.

His counterpart from the House of Representatives, Hon. Olusegun Odebunmi, said the commitment of government to DSO is in line with resolves to make life easy for the masses.

He said digitisation is a dividend of democracy with creation of thousands of direct and indirect jobs.

Earlier in a welcome address, the Director-General of NBC, Malam Ishaq Modibbo-Kawu, said with the launch, TV viewers in Abuja would have access to 30 free channels with bouquet of programmes on local, national and international contents.

Modibbo-Kawu said Set-Top Box, the device to be placed on each television for receiving digital signal, would be sold at a subsidised rate of N1,500 per box.

He said the box is interactive and would provide other value added services for television viewers.