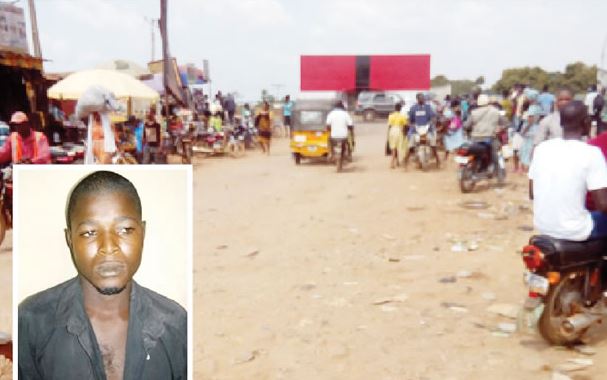 A 20-year-old suspected murderer, AbdulrahmanMuhammed, has thrown the family of a commercial motorcyclist, Owechu Odeje, into mourning after he allegedly slit the okada rider’s throat.

Twenty-five-year-old Owechu operated under the aegis of the Articulate Motorcyclists Owners and Riders Association of Nigeria, Iyana Iyesi branch, in the Ado- Odo Ota Local Government Area of Ogun State.

PUNCH Metro learnt that Owechu was takingMuhammed from Ijaba junction to Ijaba Pipeline, a neighbouring community to Iyana Iyesi, when the latter reportedly killed him and fled with the motorcycle, leaving him in a pool of blood.

It was gathered that the suspect fled to Iju, another neighbouring community, where he was eventually arrested by the police.

The deceased’s elder brother, Clement Odeje, said he was too sad to speak on the incident.

A relative, Emmanuel Omajowu, demanded that the suspect should face the full weight of the law, saying Owechu’s death had devastated his parents and the entire family.

He said, “Around 10am last Tuesday, he was taking the Hausa man (Muhammed) from Ijaba junction to Ijaba Pipeline. The place is a developing area and it is usually deserted. They were on the way when he suddenly brought out a knife and slit Owechu’s throat.The killer escaped with the motorcycle.

“Owechu’s death is a big blow to the family. He was friendly and generous. We want the police to prosecute the case diligently and let justice be done.”

A resident, who spoke on condition of anonymity, said okada riders had stopped Muhammed at Iyana Iyesi, because they saw bloodstains on his clothes.

“He lied to them that he had an accident with a passenger and that he was going to a hospital in Iju to treat himself. That was why they allowed him to go. When the corpse of the motorcyclist was later found, a boy said he saw him with Muhammed.

“A leader of Hausa in the community called Muhammed on the telephone to wait at Iju and the police went there to arrest him,” he added.

However, Muhammed, who spoke in Hausa, told the police that argument over N50 change led to a scuffle between him and Owechu,during which he stabbed the victim.

He said, “When I reached my destination, I gave him N200 and asked for N50 change. He said my fare was N200 and refused to give me change. As we were exchanging words, he slapped me. He removed theknife from my pocket and we started struggling.

“I managed to collect it and stabbed him. I didn’t mean to kill him.”

Our correspondent, who visited Iyana Iyesi on Friday, learnt that it took the intervention of the community leaders and a police team, led by the Divisional Police Officer of the Onipanu division, CSP Muyideen Obe, to douse the tension that ensued after Owechu’s killing.

A rider, who identified himself only as Bolaji, said, “For two days, Hausa traders around the park could not open shops because the other residents were angry. The Hausa leader, baales within communities in Iyesi and the DPO had to come to the park to pacify us.”

A member of AMORAN executive, Gafar Ajayi, said the motorcyclists in the park had been warned against taking passengers to deserted places to avert a recurrence.

“Since that incident happened, our men no longer take passengers to Ijaba Pipeline. The incident pained all of us and we don’t want a repeat. We have also warned them to assess their passengers and report suspicious ones. Peace has been restored, but we want justice,” he added.

The Ogun State Police Public Rations Officer,ASP Ambibola Oyeyemi, said the suspect had been transferred to the State Criminal investigation and Intelligence Department in Eleweran, Abeokuta, for investigation.

“As soon as the investigation is concluded, he will be charged to court,” he added.