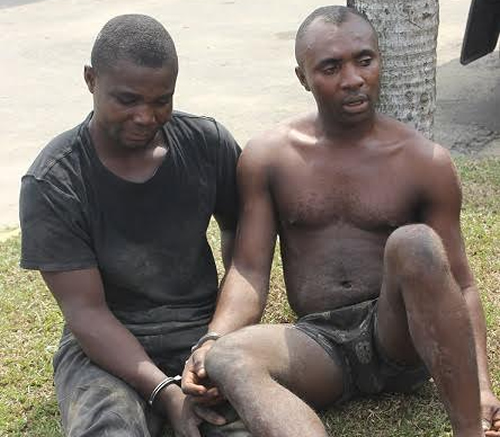 A major bank robbery attack was on Thursday foiled by personnel of the Rivers State Police Command.
The new generation bank located along Eagle Cement area was stormed by a combined team of Special Anti-Robbery Squad, (SARS) and regular policemen from Rumuolumeni Police Station, who acted on a tip-off.
According to reports, the hoodlums on sighting the policemen opened fire to which the operatives retaliated leading to arrest of three suspects while a SARS operative was also injured.
The State Spokesperson, Mr. Nnamdi Omoni, who confirmed the incident to newsmen in Port Harcourt, said the bank robbers were arrested at about 2am on Thursday while they were using a gas cylinder to cut open an entrance into the bank.
Omoni disclosed that the SARS operative that sustained gunshot injury was immediately rushed to the hospital for treatment.
He identified the three suspected bank robbers (all males) as Samuel Nwara (28) from Igwuruta town, Kaaly Taagaba (28) from Kpong, Khana LGA and Lucky Ukwuoma (26) from Etche LGA.
“Today (Thursday) at about 0200hrs, upon a distress call that there was a robbery going on at a new generation bank at Eagle Cement, Rumuolumeni, combined team of SARS and men of the Rumuolumeni Police Station led by the DPO, Felix Nnebue stormed the scene of the robbery.
“On sighting the police, the robbers opened fire on them, a situation that led to an exchange of fire. At the end, three armed robbers were arrested while one of the SARS operatives sustained gunshot wound. He is currently receiving treatment in the hospital,” he added.
Explaining that the suspects were helping the police in their investigation with a view to arresting others on the run, Omoni listed one cooking gas cylinder, one handsaw, one chisel and two Ghana-must-go bags as items recovered from them.
“The Commissioner of Police, CP Francis Odesanya, wishes to assure the people of the state that the Command under his watch has vowed to relentlessly fight all manner of crimes in the state.
“He (Odesanya) has promised to make Rivers State safer, especially during the Yuletide period and urged the public to have confidence in the police and continue to share information with the police,” Omoni added.