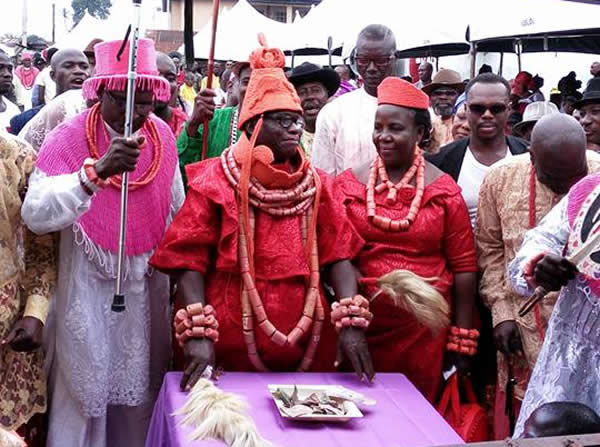 The Ovie of Agbarha-Warri Kingdom in the Warri South Local Government Area of Delta State, Orhifi Orovwagbarha Agbarha-Ide Ememoh II, who was abducted on Wednesday, has been rescued by operatives of state’s police command less than 24-hour after he was kidnapped.

The monarch was rescued by a team of local vigilante groups and the Delta State Police Command led by its commissioner, Mr. Zanna Ibrahim, at about 3:12am on Thursday morning.
A palace chief confirmed the released of the Urhobo monarch to our correspondent on Thursday morning when contacted.
The Agbarha-Warri paramount ruler was abducted on Wednesday along the Ughelli/Asaba Expressway near Ossissa community in Ndokwa-East Local Government Area of the state while traveling for a Security Summit in Asaba, the state capital.

The state police commissioner confirmed the rescued of the traditional ruler to our correspondent on telephone, saying would be conveyed to Asaba, where he was headed before the incident, but was relaxing in an undisclosed hotel as of the time of the phone conversation.

The commsioner said the monarch was rescued after he led a team of hundred police operatives and 30 local vigilante groups to comb the Ossissa forest along the area where he was waylaid by suspected herdsmen who had earlier robbed vehicles plying the busy road.

Ibrahim said, “The Ovie has been rescued by a police crack team personally led by me. The monarch’s abductors were fleeing with him to a different location after our men combed the entire bush in search for him.

“The monarch was abducted by herdsmen. They are very conversant with the bush even more than the indigenes. Our men sighted the movement of the hoodlums through a torch light and we shot into the air which they responded. They engaged us (police) in exchange of gun fire and left the monarch behind.

“There was laxity on the part of the driver who sighted the kidnappers robbing other vehicles but refused to reverse the car for safety. We have learnt our lessons from the kidnap of the monarch. The lesson is that we all need to be alert and vigilant.”

The commissioner added that no arrest was made during the rescue operation but police operatives have been deployed in the area to smoke out the suspects.