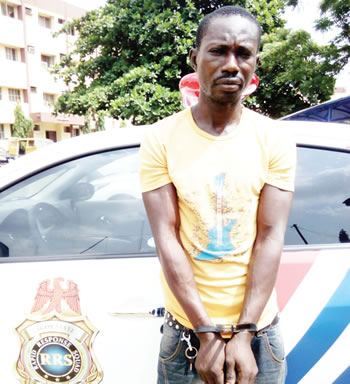 The wanted leader of a kidnapped gang, Suleiman Seidu have been arrested by the operatives of the Rapid Response Squad of the Lagos State Police Command after a policewoman was planted as a decoy among the gang.

The Kogi State born hoodlum was apprehended last Friday in Owode area of Ogun State while planning to abduct a two-year-old boy.

Reports had it that the 33-year-old Seidu contracted two of his friends in Ogun for the operation. One of the accomplices who want no part of the scheme quickly reported to the police.

A police source said a member of the RRS was however, planted as a decoy to infiltrate the kidnap gang and get wind of their operations for easier apprehension of the criminals.

“We got a hint about the kidnap from one of the two persons that the prime suspect contracted. The man was not okay with the idea, so he came to tell us,” the source said.

“A female member of the RRS decoy team joined the gang. She was given the job of taking care of members and the child after his abduction. For more than two weeks while the operation took shape, the investigator, pretending as an accomplice, got information from the prime suspect.

“The suspect told our mole that he had a motorcycle to aid him in the abduction of the boy, adding that the ransom would be N10m.  He said the boy’s father was a landlord and a dealer in electrical appliances.”

The RRS team upon getting approval from the Ogun State Commissioner of Police, Ahmed Ilayasu, stormed the residence of Seidu and arrested him.

While confessing, the suspect (Seidu) said he planned to use the ransom on the boy to treat his ailing mother.

“I had been monitoring the boy for two weeks.  I observed that whenever the driver was taking him to school; he would first alight from the car to lock the gate because they didn’t have a gatekeeper in their house. Also, he takes him to school between 7am and 8am,” Seidu said.

“What I planned was to kidnap the boy when the driver alighted from the car to close the gate and escape on a waiting motorcycle.

“I live in a room and parlour apartment, and I planned to keep him with me till his parents pay the ransom.

“I planned to demand N10m, but if his parents could not afford the whole money, I would have accepted N3m at the end of the day.

“I conceived the idea to kidnap him when I was left with no option because my mother is very ill at the moment.

“I just relocated to the area and didn’t know the nook and cranny very well. I thought of getting someone who knew the environment well to make the job easier for me.”

In his reaction, the father of the child simply identified as Udwu praised the Police for their proactive action in saving his family from the imminent danger.

While expressing his joy, Udwu thanked God for the averting the danger as he added that he had no idea of the looming calamity.

The Lagos State Police Spokesperson, SP Dolapo Badmos, who confirmed the arrest said the suspect would be charged to court upon the completion of investigation.

“The suspect has been transferred to the State Criminal Investigation and Intelligence Department, Yaba, for further investigation,” she added.