Recession: Hard Times For Motorists As Nigerians Resort To Trekking

From the astronomical  rise in the prices of food items, fuel, house rent and  in the general cost of living, Nigerians are faced with hardship. Many car owners have abandoned their vehicles to journey by commercial buses, just as scores now travel on  foot. SOLOMON AYADO reports.

At the popular Berger roundabout near the Wuse area of Abuja, passengers who came to board vehicles to Nyanya-Maraba suburb of the Federal Capital Territory, after close of work, had refused to join the city taxis, with several persons including men and women, young and old, stood for several hours waiting for the mass transit buses popularly known in as El-Rufai. While some passengers who had arrived earlier wishing to board the vehicles were scrambling to position themselves to first secure entry, others who could not struggle were left to their fate.

About two hours after, a mass transit Marcopolo bus arrived. Immediately, there was commotion in the place as everyone struggled to enter the vehicle. Because the fare for the buses is lesser, many people prefer to commute by them. At the place, everybody was eager to enter commercial bus to avoid high charges by smaller cars. Due to the struggle  a lot of persons lost their belongings including handbags, GSM handsets among others.  It was about 7pm. The mass transit bus came, loaded and drove off immediately. 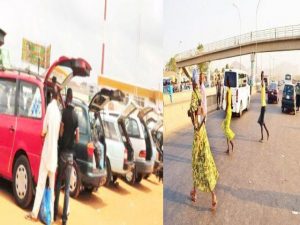 Scores of people who could not scramble and were not able to join the mass transit bus became stranded. Others waited if another would come. Suddenly, a young man who appeared to be one of the taxi drivers in the place said “that is the last bus, another one will not come.” The hopes of the people were quickly dashed because they were faced with no other option than to board the cabs that usually charge between N400 and N500, depending on the distance.

Also, the number of pedestrians who trek on the streets nowadays have suddenly increased. Unlike in the past when the economy was stable and people were able to afford money to pay for city cabs, now, the situation is different. Because of hike in the price of fuel coupled with the reality that there is lack of money, many people trek to save cost.

Even if the people had wished not to trek, the mass transit buses that charge lesser fare do not ply some areas that house prominent offices, ministries and department agencies. It is pathetically unimaginable how a person will be corporately dressed, with a folder or handbag to match, and would trek miles simply to beat down cost.

All over the country, investigations have shown that the number of faulty vehicles parked along the roads  these days,  is alarming. If it is not lack of fuel, it is mechanical or electrical fault. In areas where commercial motorcycles are restricted, the situation is worse. A lot of motorists no longer use air conditioners in their vehicles for fear of fuel  consumption. Many people have held that driving without air conditioner reduces car pressure.

“These days, I no longer use my car because most times, there is no money to buy fuel. And my car is not in good shape, I need to service it, if not, it may one day collapse on the road. Things are very difficult and there is no money. Prices of things in the market have jumped and fuel is no longer selling at the affordable price we used to buy. The worst of it is that, my salary is not regular and anytime it comes, problems are already waiting. The situation is not funny,” Kingley Johnson, a car owner lamented.

Scores of persons in many Nigerian communities that are hit by the current economic recession believe that if government can boost the economy and end the hardship, life will be better and the living condition of the people will improve. According to them, there is no way life can be better when salaries are not regularly paid and prices of items in the market are increasing everyday.

An Abuja based civil servant, Mr. Kelly Okafor, is not taking chances in this period of economic recession. Because of the dwindling economic situation, he has parked his car, uses commercial vehicles to come to work everyday. He stays in Lugbe but works in the central business district.

Married with children, Okafor is facing difficult times as he had to cope with school fees of his children and feeding of his entire family. With a wife and five children, all staying in a room and parlor apartment, he is not finding things easy. He believes that cutting down his luxury living was the best alternative that would make him cope in the recession. He resorted to trekking to save cost. He decided to trek instead of taking taxis to nearby places whenever he was at work.

“Nowadays, I no longer use my vehicle to come to work. It is cheaper to board commercial vehicles  than to use my car. Whenever I am able to afford fuel, I use my car partly as commercial vehicle to support my income in order to fuel it. There is no pretense. My family is the most important thing to me and coping with issues of school fees and feeding is not an easy task,” he said.

As the times are tough, Ode Odi has decided to do things differently. He does not completely park his car but he uses it as commercial whenever he closes from work. Odi picks passengers whenever he is going to work, and he does same whenever he is returning. What is most steady for Odi is that, after close of work, he would resume full commercial services in the city.

Odi’s case is one among many Nigerian motorists who are confronted with hardship and are committed to changing their level. “I stay in Kubwa. Whenever I come to work in the morning, I pick passengers and drop them at the Nicon junction before going to office. Whenever I am coming back, I do same. The money enables me to buy fuel, recharge card and even feed. It is no joke but man must survive.”

The untold hardship faced by Nigerian motorists have, however, assumed a serious dimension since the economy is not yet stable. Before then, the number of persons that trek on the street was this high. At the commercial motor parks, the number of passengers that thronged was not comparable to what is obtainable these days.

Commercial drivers have agreed that there is low patronage of passengers and  that many of them usually fail to pay exactly the fare fixed. Besides not complying with payments, the passengers were said to be smarting up as many of them would board a vehicle to a particular destination but along the line, will drop before the place initially intended.

“At the motor park, passengers come every day but many of them beg as they find it difficult to pay for the exact fare fixed. They complain of the recession and they hardly have money for the fare. Some of them lament ill health among other things. But some are smart because they will tell you that they want to reach a particular destination and on reaching there, they would drop, tell you the place is still ahead which is not not commiserate to the fare paid,” a commercial motorist said.

Students are not left out in this time of recession. They trek miles to attend school and many of them request or beg free ride from motorists. Many of them are being taken care of by their parents.

“We trek to school these days. Before, our mother who sells in Wuse market would give us money to board taxi but now, things are difficult and because the distance is not too much, we trek it. It is not all the time we board the cabs. Our mother said things are difficult, that there is no money so we should cope with it. It is not easy because we sweat and whenever we get to school, we are weak. Some people sleep in the class but we are hoping that as soon as our mother gets money, we shall stop trekking,” Uche,  a student lamented.

The top hierarchy of the federal government seems to be aware that the people are suffering due to the dwindling economy and that they are fast loosing hope in the effort of the government of the day towards ending the recession. President Muhammadu Buhari recently appealed to Nigerians to be patience, saying he will evolve proactive measures to enhance economic stability in the country.

But that appeal appeared to fall on deaf ears and not compatible with the expectations of the generality of the people. Rather, they have called on the federal government to quickly normalize the  prices of items in the market. There should be steady and affordable fuel price and money should be made to circulate, not only among top government officials but within the common people.

“The federal government must act fast. We are tired of hearing promises. The economy must improve despite drop in oil. The people must not continue to suffer. Life has to change for the better. And the situation has been worse now that the price of food, fuel and other things are very high. We appeal that there should be that real positive change and not gimmicks,” a concerned Nigerian said.