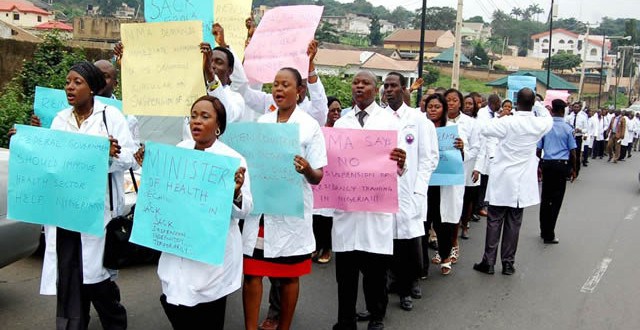 The National Association of Resident Doctors, NARD, has urged the Federal Government to urgently intervene in the lingering crises in the health sector to avert an impending strike by doctors.

The News Agency of Nigeria, recalls that NARD had issued a three-week strike notice that is expected to end on Jan. 2, 2017.

The Public Relations Officer of the association, Ugoeze Asinobi, told NAN in Yenagoa on Monday that the doctors had shelved the planned strike three times in the past four months and were bent on going n strike from January 2.

Resident doctors are agitating for a uniform template for the Residency Programme, infrastructure for tertiary health facilities, proper grading of doctors and payment of outstanding salaries amongst other issues

“We don’t want strikes but we are going to have to resort to it again, the residency programme is fundamental to effective healthy care given the dearth of manpower as the country has less than 20 per cent of required experts.

“Each time the ultimatum expired we shift it in the hope that things will be made right within the time given but it is now obvious the ministry officials are insincere.

“The issues we go on strike for are always the same issues and we are resolute to withdraw services come January 2 if our concerns are not addressed..

“One wonders if health ministry officials are sabotaging the efforts of President Buhari on purpose as their brazen and blatant disregard to the most basic institutional needs of the major workhorses of the health sector leaves a lot to be desired.

“Their attitude leaves one bewildered as sabotage appears to be the only logical explanation,” Mr. Asinobi said.

He alleged that officials of Federal Ministry of Health were playing politics with the lives of Nigerians and accused them of being insensitive and disconnected from the realities the masses are facing in their daily lives.

Mr. Asinobi said that NARD frowned at the wastage in building new primary health centres rather than rehabilitating, equipping and staffing existing ones with requisite manpower.

The NARD spokesman explained that resident doctors had always embraced dialogue and discussions in finding lasting peace, but regretted that their commitment to peace and industrial harmony was yet to be reciprocated.

He said that the present executive of NARD remains committed to end the myriad of problems adversely affecting the welfare of resident doctors.