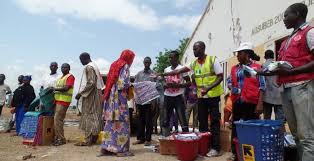 Governor Kashim Shettima of Borno on Wednesday called for prosecution of persons who allegedly diverted 50 bags of rice meant for Internally Displaced Persons (IDPs) in the state.

Mr. Shettima gave the directive in a statement by his spokesperson, Isa Gusau, in Maiduguri.

The directive followed report that hundreds of IDPs apprehended some officials of the Borno State Emergency Management Agency on Tuesday morning for alleged theft of food meant for their upkeep.

“Four officials were said to have been arrested by the police after IDPs held them.’’

Mr. Gusau said Mr. Shettima was very bitter about the development and has vowed to ensure anyone found wanting amongst those arrested was prosecuted.

“Governor Shettima approved funds for the foodstuff at the IDP camp and he is deeply pained by this development”, he said.

He added that the governor regarded diversion of food meant for IDP’S as a crime against humanity which must not go unpunished.

He pointed out that the food in question was part of those bought by the Borno State Government for feeding of IDPs in December.