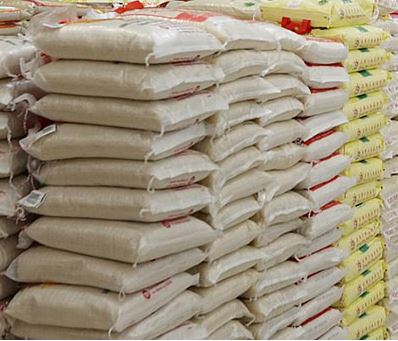 Haruna, who disclosed this in Lagos, said the public should be very careful in patronising the smuggled commodity.

The controller said that those eating such smuggled rice were damaging their systems.

He said some of the expired rice had been impounded by officers and men of the service and kept in the warehouses.

The importation of rice through the border stations was banned in April 2017.

Haruna said smuggling of rice had become so rampant that youths risked their lives on motorcycles carrying five to six bags each.

He said that other devices used included transporting between 35 to 50 bags in smaller trucks.

Haruna said there was no way one could get a good rice consignment with the appropriate price from the smugglers, except the ones brought through the seaports.

The comptroller said, “for plastic rice, I am yet to come across plastic rice.”
To curb smuggling, he said that the service had intensified operations at various bonded terminals and warehouses to ensure compliance with the extant laws.

He said, “To this end, about six warehouses in Lagos that have contravened the laws are under customs seal and pending thorough investigation.”
The controller said that one of the sealed warehouses contained 23,000 bags of rice and 44,000 empty bags for re-bagging.

He also showed a detained cement company’s vehicle, (name withheld) containing both cement and rice but for smuggling rice.

Haruna said that between October and November, the unit intercepted various contraband with a Duty Paid Value of N325.53m.

He said the unit also recovered N286.62m from duty payments and demand notices on vehicles and other general goods that tried to beat the system from seaports, airports and border stations.

He said, “In the guise of false declaration, transfer of value and shortchange in duty payment that are meant for the Federal Government.

“Making a cumulative of N611.67m in the months of October and November 2016.”
According to the controller, in the months under review, 210 different seizures were recorded comprising vegetable oil, foreign parboiled rice, frozen poultry products, smuggled vehicles, Indian hemp and various general merchandise.

Haruna said that 77 suspects were apprehended, out of which 17 suspects had already been charged to court for prosecution and four suspects had been convicted but on Appeal at the Appeal Court, Lagos.

He said that other suspects, mostly drivers, not culpable had been released on bail.

The controller said that 1,300 parcels of Indian hemp with three suspects had also been handed over to the National Drug Law and Enforcement Agency, Lagos State Command for prosecution to serve as deterrent to other drug barons.