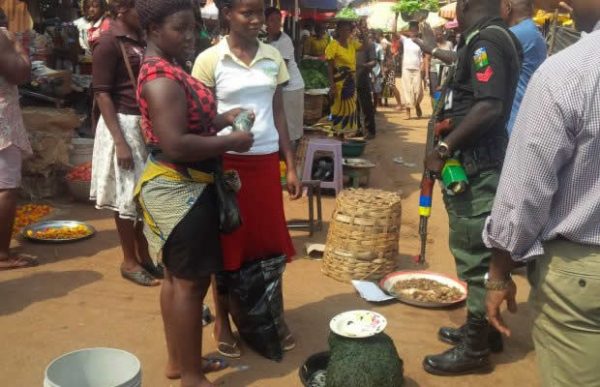 Tension was high at the Garki Area of Enugu State on Wednesday following a deadly clash between the Fulani and the Igbos.

Already, the police in the state confirmed to DAILY POST that two persons were killed during the bloody clash.

The deceased persons were identified as one Ali, a Fulani and Ifeanyi Ifeacho, an Igbo.

The incident is coming few days after a policeman was killed at the New Artisan Market, prompting the closure of the market by the State Government.

According to an eyewitness, trouble started when Ali came from the New Artisan Market with a cow to slaughter in the Gariki abattoir.

He disclosed that “Ali came to Gariki abattoir where Ifeanyi worked as attendant to slaughter his cow, following the closure of New Artisan Market by the state government early this week.

“When Ali finished slaughtering his cow, he gave Ifeanyi N400 instead of the N500 fee for slaughtering a cow in the abattoir.

“Ifeanyi asked him to give him the remaining N100 but the Fulani man remained adamant, insisting that he would not pay any other money.

“The misunderstanding degenerated to a fight between the two.”

It was gathered that Ali quickly pulled out a dagger and stabbed Ifeanyi severally on the stomach.

Ifeanyi slumped on the ground and died on the spot.

“When he realized what he had done, he (Ali) attempted to escape from the market but some outraged Igbo traders grabbed him and killed him in turn.

“The angry Igbo traders mobilized and burnt down the mosque inside Gariki market.”

The Spokesman for Enugu State Police Command, SP Ebere Amaraizu, who had earlier confirmed the incident through a text message to our correspondent, said the command deployed anti-riot policemen to Gariki market immediately to stop the situation from escalating.

He stated that: “Two persons were confirmed dead during a clash between an Easterner and a Northerner over an alleged misunderstanding that arose between them in the evening at Gariki Awkunanaw Market.

“Security has been beefed up in the area by Enugu State Commissioner of Police, Douglas Agbonleni, to avoid escalation and breakdown of law and order, just as a full scale investigation has commenced into the incident.‎”