Adama Barrow took the oath of office as Gambia’s president yesterday at its embassy in neighbouring Senegal, calling for international support as regional troops prepared to back him in a showdown with incumbent Yahya Jammeh, who has refused to step down. 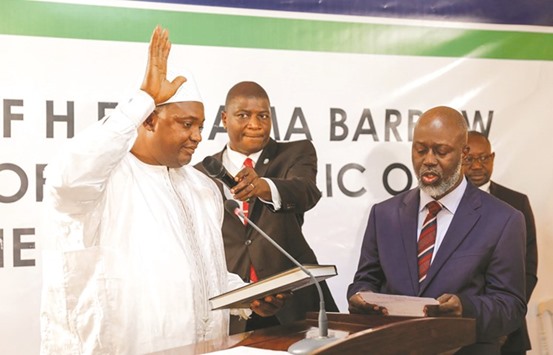 Barrow’s appeal that could trigger a military push into Gambia by West Africa’s ECOWAS (Economic Community Of West African States) bloc, which has said it is ready to remove Jammeh by force if necessary.

Jammeh, in power since a 1994 coup and whose mandate ended overnight, initially conceded defeat to Barrow following a December 1 election before back-tracking, saying that the vote was flawed.

Overnight talks to persuade him to stand down failed, despite his increasing political isolation.
“This is a day no Gambian will ever forget,” Barrow said after taking the oath, which was administered by the president of Gambia’s bar association.

“Our national flag will now fly high among the most democratic nations of the world. I hereby make an explicit appeal to ECOWAS, the (African Union) and the UN … to support the government and people of the Gambia in enforcing their will, restoring their sovereignty and constitutional legitimacy,” he said.
ECOWAS and the African Union have said they will recognise Barrow.

Senegal’s army, which has deployed hundreds of soldiers at the Gambian border, said on Wednesday that it would be ready to cross into its smaller neighbour, which it surrounds, from midnight.
Ghana has also pledged troops.

A senior military source in Nigeria, which pre-positioned war planes and helicopters in Dakar, told Reuters that regional forces would only act once Barrow had been sworn in. 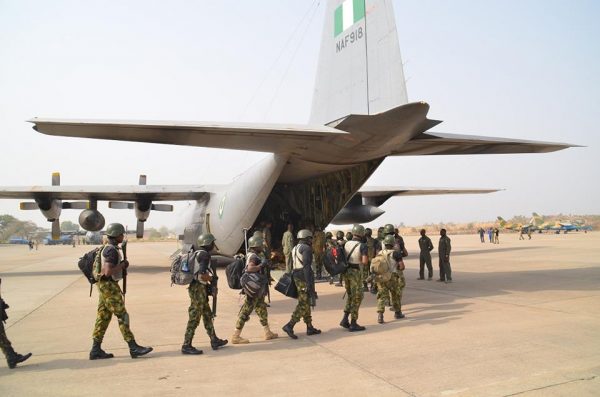 Late yesterday Senegal army spokesman Colonel Abdou Ndiaye wrote in a text message to Reuters that “we have entered Gambia”.

Barrow gave the oath in a tiny room in Gambia’s embassy in the Senegalese capital, Dakar, and many of those present broke into the Gambian national anthem once he had completed it.

Outside the building on a residential street amid a heavy security presence, dozens of Gambians listened to the ceremony through loudspeakers.

“It’s very sad to be swearing in a president in someone else’s country. I am happy and sad at the same time,” said Fatou Silla, 33, a businesswoman who fled Gambia with her son a week ago.

Fearing unrest, thousands of Gambians have fled the country, the United Nations estimates.

A resolution drafted by Senegal won the support of all 15 council members, including Russia, which stressed that the measure did not formally authorise military action in Gambia.

The resolution calls on the council to give “its full support to the ECOWAS in its commitment to ensure, by political means first, the respect of the will of the people”.
The measure does not invoke Chapter 7 of the UN charter, which authorises the use of force.

Russian Deputy Ambassador Petr Iliichev stressed that the resolution calls for political means to resolve the stand-off and warned that military action could fail.

“For the time being, there is no bloodletting but if they intervene, who is going to take responsibility for that?” Iliichev told reporters ahead of the vote.

UN diplomats said if Barrow requests a military intervention in Gambia, this would provide the legal basis for the use of force.

“We are hoping that there is a peaceful resolution to this, but it is very clear that if President Barrow asks for assistance, then that is something that, as the legitimate president of Gambia, he is perfectly entitled to do,” said British Deputy Ambassador Peter Wilson.

The resolution requests that Jammeh “carry out a peaceful and orderly transition process, and to transfer power” to Barrow.

It urges “all stakeholders, within and outside Gambia … exercise restraint, respect the rule of law and ensure the peaceful transfer of power”.

At a bar in the Gambian capital Banjul’s popular SeneGambia strip, people crowded around a television to watch the swearing in and cheered and danced when it was over.

“I’m so happy there’s a new government,” said a cashier who only gave her name as Fama. “We have been suffering for 22 years and now things will be different.”

During the brief inauguration speech, Barrow asserted his new role as commander and chief of Gambia’s armed services, ordering soldiers to stay calm and remain in their barracks.
Those who did not would be considered rebels, he said.

As tour companies pressed on with the evacuation of hundreds of European holidaymakers, shops, market stalls and banks in Banjul remained closed while police circulated in trucks and soldiers manned checkpoints.

It was unclear what Jammeh’s next move would be.

He faces almost total diplomatic isolation and a government riddled by defections.

In the biggest loss yet, Vice-President Isatou Njie Saidy, who has held the role since 1997, quit on Wednesday, a government source and a family member told Reuters.

Gambia’s long, sandy beaches have made it a prime destination for tourists but Jammeh, who once vowed to rule for “a billion years”, has also earned a reputation for rights abuses and stifling dissent.
He has ignored pressure to step aside and offers of exile.