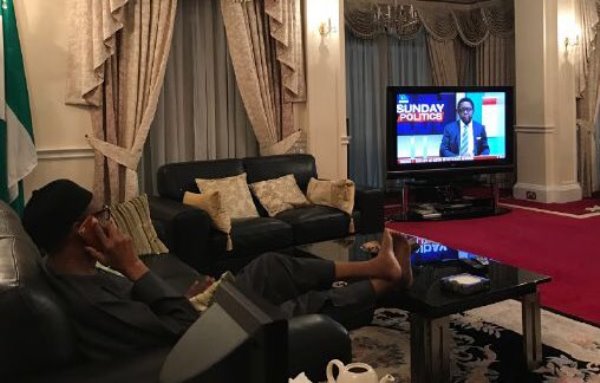 President Muhammadu Buhari, currently on a short vacation in the UK, has saluted the Nigerian media for performing its duties diligently.

The President, who made his position known on his Twitter handle, @MBuhari, on Sunday in London, said he was always in touch with news from home.

President Buhari, whose picture was also posted in the tweet, specifically named Channels TV as one of his favourite Television stations.

He said: “Wherever I am, I keep up with news from home. Channels TV is one of my favorites. I’m proud of what the Nigerian media are achieving.’’

The post has, therefore, dispelled the insinuation about the President’s health conditions.

One of the post on Facebook said: “Godly for mouth, devilish at heart…how on earth could anyone use death as a mischief tool? It is only God the almighty that giveth life and HE alone has the power to taketh same life.”

“For those spreading wicked and evil rumour about death of a soul, they should know that; they themselves don’t know when, where and in which circumstances they will perish.

“They can wish PMB death thousand times and have fun; the same God that created them from drop of sperm to their miserable state is watching them. Long live Nigeria and good Nigerian people, long live PMB!”

President Buhari left Abuja for the United Kingdom on Thursday on a short leave, which is part of his annual vacation.