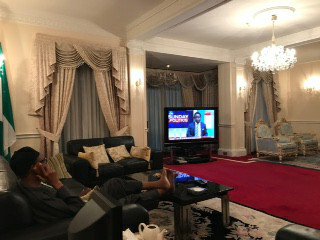 The presidency has released pictures of President Muhammadu Buhari holidaying in the United Kingdom.

The latest pictures have further laid to rest the media reports that the president was dead.

There was palpable fear and confusion in the country during the weekend when report cropped up in a section of the media that the president has passed on at the age of 74.

However, the presidency while describing the report as unfounded, said Buhari was alive and enjoying his holiday.

To further confirm the report that the president was not dead, presidential spokesman, Femi Adesina on Monday morning released some pictures of the President watching him (Adesina) as a guest on Channels TV on Sunday.

In the pictures, Buhari was spotted donning a black kaftan and a black cap in a palour while watching Adesina on Channels Television.

He wrote on his official Facebook page, “As he holidays in London, President Muhammadu Buhari keeps abreast with events at home. On Sunday, Special Adviser to the President on Media and Publicity, Femi Adesina, was guest of Channels Television. President Buhari also kept a date, January 22, 2017.”