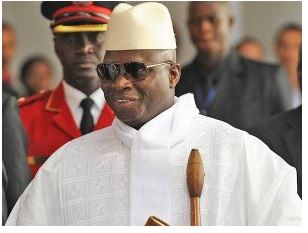 West Africa regional leaders yesterday signified their readiness to carry out their threat to force The Gambia President Yahya Jammeh out of office if he does not vacate the seat today for President-elect Adama Barrow.

They had threatened to use military force to remove President Jammeh should he refuse to hand over power to Barrow. Countries in the sub-region, under the auspices of the Economic Community of West African States (ECOWAS) yesterday began the deployment of troops to the Gambia’s borders in Senegal, in a show of force to pressure President Yahya Jammeh to stand down today.

This is just as the country’s vice president, Isatou Njie-Saidy and minister of higher education, Aboubacar Senghore resigned yesterday.

The Nigerian Air Force (NAF) deployed 200 men and air assets comprising fighter jets, transport aircraft, Light Utility Helicopter as well as Intelligence, Surveillance and Reconnaissance aircraft to Dakar, Senegal, from where they are expected to move into Gambia as part of the Economic Community of West African States Military Intervention in Gambia (ECOMIG) – a standby force tasked by ECOWAS Heads of State to enforce the December 1, 2016 election mandate in the The Gambia.

Similarly, Senegalese troops have been seen moving towards the Gambian border, the BBC reported yesterday.

Senegal gave him a midnight deadline to quit.

The Gambia’s parliament has extended President Yahya Jammeh’s term by 3 months. It was originally due to end today, Thursday, after his defeat in December elections. The parliament has also approved Jammeh’s 90-day state of emergency in The Gambia.

A statement by the spokesman of the Nigerian Air Force, Ayodele Famuyiwa, said NAF moved a contingent. The deployment is also to forestall hostilities or breakdown of law and order that may result from the current political impasse in The Gambia.

Addressing the contingent before departure, the Chief of the Air Staff, Air Marshal Sadique Baba Abubakar urged the troops to maintain discipline and be professional in their conduct.

Reminding them to be good ambassadors of Nigeria, the CAS stated that no act of indiscipline by the contingent would be tolerated.

Other troop contributing countries include Senegal, Ghana and countries within the sub-region.

Regional leaders have threatened to use military force to remove Jammeh should he refuse to hand over power to President-elect Adama Barrow today, Thursday.

A military source had equally reported to the BBC that a Nigerian warship was sailing towards The Gambia as a show of force ahead of possible military intervention.

Meanwhile, thousands of UK and Dutch tourists are being evacuated from The Gambia. The country, popular for its beaches is frequented by European holidaymakers. The news of UK tourists being returned from The Gambia, came after the Foreign Office issued new travel advice. The travel agency, Thomas Cook intends to bring home 985 customers from package holidays over the next 48 hours.

Another 2,500 flight-only customers will be offered in what it called the ‘earliest available flight ‘from the west African country. Presently, the Foreign Office now advises against all but essential travel to The Gambia.

The specialist tour operator The Gambia Experience, has said it was getting in touch with its 225 package holiday customers and 109 flight-only customers in the Gambia, in order to be able to take them home.

The international airport in the capital Banjul could be closed “at short notice”, according to the Foreign Office travel advice.

The West African country was thrown into chaos after Jammeh refused Barrow’s victory in the December 1st election, which came as a shock to Jammeh.

Following a televised announcement on Tuesday, Jammeh said “any acts of disobedience to the laws of The Gambia, incitement of violence and acts intended to disturb public order and peace” were banned under the state of emergency. Jammeh indicated that security forces were instructed to “maintain absolute peace, law and order”.

The US State Department has encouraged Jammeh to hand over power to Barrow today.

The spokesman, John Kirby said, “Doing so would allow him to leave office with his head held high and to protect The Gambian people from potential chaos.”

“Failure to do so will put his legacy, and more importantly The Gambia, in peril,” he added.

As part of its efforts, the Economic Community of West African States (ECOWAS), has prepared a Senegal-led force to remove Jammeh should he refuse to step down.

Both ECOWAS and AU have said it will not recognise Jammeh as president after today.

Presently, Barrow, is in Senegal and his aides have said that he would return to The Gambia for his inauguration. Barrow’s tweet after the state of emergency stated that, “We made history on the first day of December. Our future starts tomorrow.”